Ensure the safety of Funny Valentine

Mike O. first appears meeting Diego Brando nearby the Michigan Lake, telling him that he gained some Corpse Parts before delivering info Diego gave to him about Lucy Steel to Funny Valentine in his villa in Chicago. Once ordered to find Lucy Steel by his boss, who had disguised herself as a member of Valentine's staff, Mike O. uses his Tubular Bells to create balloon dogs from nails to have them sniff a phone used by Lucy to memorize her scent. After being turned back into nails, Mike O. gains permission to assassinate Lucy, to which Mike O. heads off to do, as he also hides some of his nails in the president's bed as a safeguard.

Eventually, the balloon dogs eventually focus their attention on as Lucy enters the room with Funny Valentine. Upon realizing the Stand is after her, Lucy quickly moves to drug Valentine to steal back the Corpse Parts, but not without Tubular Bells attacking her. Upon noticing the sprung trap and the president's wife firing at Lucy, Mike O. and other guards rush into the bedroom, but before they do so, Lucy manages to use the "second skin" Hot Pants gave to Lucy to trick the dogs into fatally attacking Scarlet.

Upon looking into the bedroom's bathroom through a widow, Mike O. notices Hot Pants asking the hiding Lucy about her obtainment of the Corpse Parts, Mike O. ambushes Hot Pants by converting more objects into balloons, to which Hot Pants fends off. Feeling dishonored, Mike O. decides to capture Hot Pants to interrogate her on the scene, but upon finding Scarlet's corpse after destroying some stalls after fighting off Hot Pants, this plan quickly turns into killing the women in revenge. Now enraged, Mike O. attempts to execute the women right then and there, but Hot Pants uses her Cream Starter's flesh spray to expand rapidly in the guard's throat. Not one to give up, Mike O. foolishly tries to continue blowing up Tubular Bells, only for his throat to explode, killing him.

Mike O. has dark skin, and average height, and a medium build magenta eyes and black, curly hair. Most of his hair is centralized in a central oval-shaped pattern on his head, and has pink spiraling markings painted on the sides of his eyes. For clothing, he wears a dark blue coat with green highlights, a pale purple scarf, pants matching his coat covered in pink spikes, and matching shoes with terracotta soles.

Mike O. takes his position as Funny Valentine's bodyguard seriously, being fiercely loyal to Funny Valentine and determined to aid him in his plans. Taking his job with a degree of honor unrivaled, Mike O. will furiously defend his boss with his life, desires to not let anything bad happen to him or his wife (which is shown when he becomes furious at her accidental death), is able to have grudges against his enemies, and is quick to demand for torture and execution being delivered to his foes. Despite this, Mike O. is also intelligent and strategic, being able to use both his surroundings and his Stand to great effect. Mike O. also uses the word "world" when describing things on a grander scale commonly.

While having no physical form, Tubular Bells allows Mike O. to inflate various metal objects as if their are balloons, eventually shaping them into floating minions that follow Mike O.'s commands. Once inflated, the balloon animals he summons can squeeze through gaps with ease, can be modeled into certain shapes, are able to do simple tasks, and attack by burrowing into foes before reverting back to their normal form (with these attacks being able to be powerful enough to break down walls). The shape of the object inflated seems to possibly have an effect on the object's shape, with "dogs" being made out of nails and "swans" being made out of shutters. 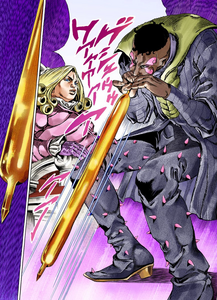 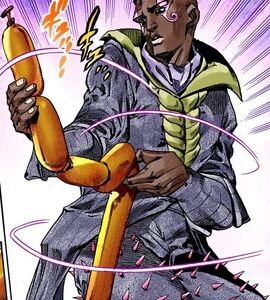 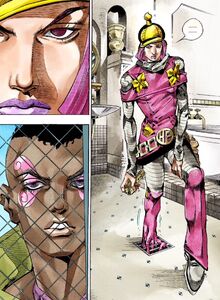 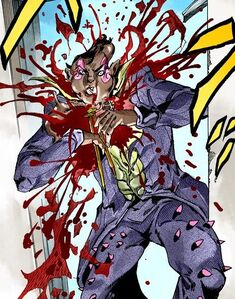