Mike and Marty are a pair of minor antagonists from the Rooster Teeth animated webseries RWBY Chibi, the non-canon comedy spinoff of RWBY. They are a pair of cynical Beowolf Grimm working under Cinder Fall.

Though Beowolves appeared throughout the series, the first episode to debut Mike and Marty specifically was season 2's "Cannonball!" (though it is possible they appeared in non-speaking roles in previous episodes). In "Cannonball!", they bail on a meeting held by Cinder to complain about how her plans and speeches are redundant. They go to get some coffee, and take a moment to mourn the loss of a Grimm named Larry that was killed by Yang. However, they are interrupted by Floyd the Geist, who begins harassing and annoying them by bragging and calling them names, causing Mike to want and attack him. Marty holds him back and lets Floyd go, but the two decide to go eat some "innocent humans" to calm down.

In "Monsters of Rock" and later "Battle of the Bands", a Beowolf is part of the band Trouble Clef, and may be either Mike or Marty.

In "Grimm Passengers", Mike and Marty try disguising as humans to hitchhike in people's cars so they can kill and eat them. They first try with Team RWBY, who do not fall for their tricks and pass them by. Cinder pulls up and does not recognize them, and attempts to kidnap them by offering them candy. Even though Mike and Marty recognize her, they decide to take up her offer because they believe she actually has candy. However, when Cinder realizes who they are, she boots them out of the car and drives away. They then try to share a taxi with Jaune and Ren, the latter of which is much more gullible then the others and has to have Ren tell him no.

Mike and Marty, though they enjoy being evil and hurting others, are also cynical. Even though they admit that they have a desire to be evil and enjoy being nefarious, they also criticize people like Cinder who never take a break from it and obsess over it. They can be down-to-earth and conversational, as they take time to just relax and hang out, but are also prone to anger. Though they like being evil, they are not very good at it and fail very easily. 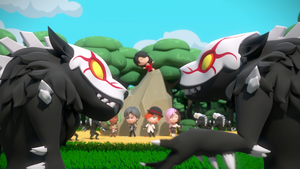 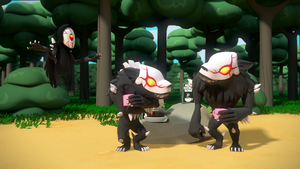 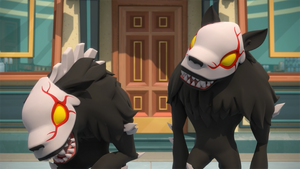 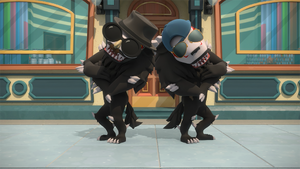 Mike and Marty in their human disguises. 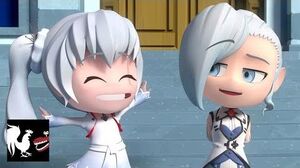 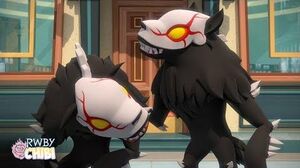