Mikhail Rasputin is a supervillain who appears in the Marvel universe. He is the older brother of Colossus of the X-Men. Mikhail serves as one of Apocalypse's chosen Four Horsemen and a boss in X-Men II: Rise of Apocalypse.

Rasputin is a mutant with substance-altering and dimension-hopping abilities. He was a Cosmonaut and the Russian Federal Space Agency tried to test his powers by sending him on a suicide mission. He was the only surviving member of his crew and returned to Earth mentally unbalanced, harboring a dangerous messiah complex.

He sometimes collaborates his efforts with other villains such as Callisto, Omega Red, Apocalypse, and Mister Sinister, though there have been times where he has teamed up with heroes as well, including his brother and other X-Men members, thus making him an occasional anti-hero. 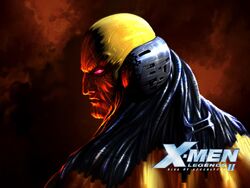