No information
Mikita, also known as Miss Valentine is the main antagonist in the manga and anime series One Piece. She is one of the main antagonists of the Whisky Peak Arc and the major antagonist of the Little Garden Arc. She also formerly officer agent who is partner with Mr. 5. And now she was currently working on the chocolate lady alongside with the Baroque Works members of the new Spiders Cafe. Her bounty is a 7,500,000 berries.

Mikita is the slim woman who has a dark eyes, bright green in the anime and an short blond hair.

She wears a orange and yellow hats, she also wears a yellow dress with a light yellow-like pattern, light yellow earrings and a white high-heeled shoes. And also wears a blue jacket with white stripes during Little Garden Arc. And lastly she carrying a bright green parasol with blue stripes umbrella.

Mikita is overconfident, while she did not take the opponents and greets any situation with the unique laugh. She was generally along with her partner Mr. 5 does any necessary talking. While she was working on Baroque Works officer agent, her confident was abilities.

Mikita choosing of the method dealing with Usopp painfully by her weight crushing him slowly shows off the preference for unnecessary cruelty. She disliked other ignoring at the people or the Straw Hat Pirates when she was attacking by the crew.

Many people who possesses a lighthearted laugh: "Kyahahaha".

Mikita using her Devil Fruit power, displays very little combat ability beyond. She must taking her partner, Mr. 5, do the most fighting while the unctions as support. In the moment, she strong to restrain Vivi. 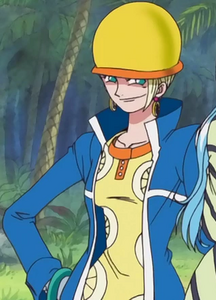 Mikita's concept art from the anime. 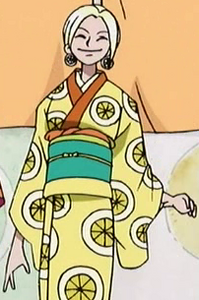 Mikita as she appears in Special 4. 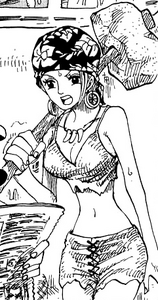 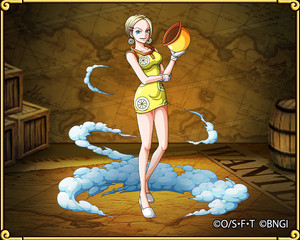 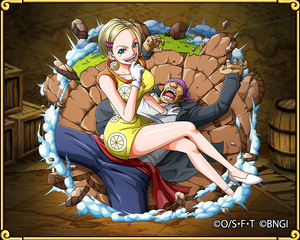 Retrieved from "https://villains.fandom.com/wiki/Mikita?oldid=4127401"
Community content is available under CC-BY-SA unless otherwise noted.