Kill everyone that he encounters

Mikos Stenopolis is an insane and indestructible killer and the main antagonist of the Italian horror movie, Absurd! He was portrayed by George Eastman.

Mikos is a nearly invincible man, known only as Mikos, a dead Greek serial murderer, whose blood coagulates incredibly fast, but this gift has made him insanely homicidal. A priest pursues the killer and attempts to destroy him by impaling him on a set of railings which disembowel him, but he is revived later in a local hospital. The madman escapes after brutally killing a nurse and goes on a killing spree. The priest informs the hospital that the only way to kill Mikos is to 'destroy the cerebral mass'.

While attacking a motorcyclist after escaping from the hospital, Mikos is struck by a hit-and-run driver. The driver of the car, Dr. Bennett and his wife are going to a friends house to watch a football game, leaving their two children at home with a babysitter. Their daughter Katia, is confined to her bed because of a problem with her spine, while her younger brother believes that the 'Bogeyman' will come to get him.

Mikos makes his way to the Bennetts' home and begins to murder everyone there. Peggy, a family helper is stabbed in the head with a pickaxe and the babysitter Emily has her head forced into a lit oven, causing her face to blister and turning purple, but not before sending the brother off to get help. Katia struggles from her bed to take on the killer herself. Mikos breaks into Katia's bedroom and attacks her, but she manages to stab him in the eye with a set of drawing compasses. She then stumbles down the hallway as the blinded killer staggers after her. He stalks her through the house and Katia manages to elude him. The priest arrives and struggles with Mikos, and Katia grabs an axe from a suit of armor and decapitates Mikos. The family arrives home to discover Katia standing in the front doorway, covered in blood holding Mikos's severed head. 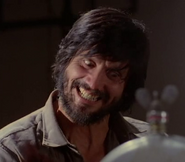 Mikos is disemboweled
Add a photo to this gallery

Retrieved from "https://villains.fandom.com/wiki/Mikos_Stenopolis?oldid=3502599"
Community content is available under CC-BY-SA unless otherwise noted.