Mildred Avallone is the main antagonist from Arcana Heart, a former antagonist in Arcana Heart 2, and a heroine alongside her sister in Arcana Heart 3 and it updates. Her ambition is the merging of human and elemental worlds in order to control both and attain god-like powers.

At the beginning of the story, she leads the Norway Spirit Society which watches over the Earth from the Arcana realm. They monitor the Maidens - girls gifted with the power of gods and goddesses in the form of Arcana.

Fiona is a maiden who got trapped on the other side and works closely beside Mildred with the two sharing an apparently close bond. Unfortunately, we find that Fiona has tirelessly guards Mildred without supporting her own well-being. Additionally, Mildred may only have pretended to give affection to Fiona in order to simply take advantage of her vulnerability in loneliness.

Her very young sister Angelica attains Mildred's power in the form of the Angel Arcana. This is likely her fate for eternity after her failure in the first Arcana Heart.

She is fought at the end of any route in the first game and utilizes all of the Maiden Arcanas in addition to some unblockable angelic attacks.

In arcana heart 3, Mildred along Angelia turn over a new leaf, After returning to the material world, Mildred and Angelia discover various disruptures across Kanto region and decide to help Maori Kasuga and Petra Johanna Lagerkvist to dissapear this anomalies and return to the spirit realm, She also allows Fiona to stay for a few days in the material world.

Mildred in contrast to Angelia, is impecably polite to friends and foes alike, while obtaining the powers of an archangel, Mildred begin to rambling about the power of gods and how they spoke through her, In Arcana Heart 2 and Arcana Heart 3 respectively, Mildred is first seen more remourseful and more willing to atone for her deeds by first allowing Fiona to return to the plane world and second to help the world and her sister to see light, which she suceeded, Once her power calm down, Mildred is deep-down a rather honorable and sympathetic individual towards those who are friends and family. 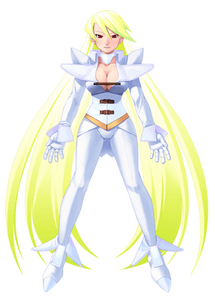 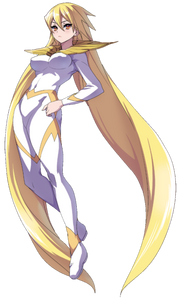