NOTE: This article is about the incarnation of Mileena (2021) from the Mortal Kombat (2021). The mainstream version can be found here: Mileena.

Bitch with the teeth (by Sonya Blade)

Skilled use of her sais
Athleticism
Razor sharp teeth
Strength

Mileena is a major antagonist from the the 2021 live-action film Mortal Kombat.

She was portrayed by Sisi Stringer.

Mileena appears when she reports to Shang Tsung that Sub-Zero killed Earthrealm warrior Jax Briggs but another Earthrealm warrior Cole Young managed to escape. Tsung ordered Mileena to send more assassins to Cole, but the two do not know that Jax survived, but lost both arms.

Another assassin was dispatched to track down Cole Young to kill him, but was killed by Kano.

Mileena, along with Sub-Zero and Shang Tsung, attacked the Raiden's Temple in which Earthrealm warriors train, but Lord Raiden himself created a force field preventing the Outworld warriors from entering the temple. In the Outworld, warriors think about a plan to enter the Temple, and Kabal comes up with the idea of ​​converting the warrior Kano to their side in exchange for money.

After Kano disables the force field, the Outworld warriors storm into the Temple. Mileena attacks Sonya Blade and defeats her, but does not kill her because she senses that she does not have the chosen one's blood and is not worth her time leaving her wounded and teleporting herself.

Teleported Mileena and Kabal fight against Cole Young and Liu Kang. Mileena fights fiercely with Cole and shows off her Tarkatanian teeths. Sonya Blade (who obtained the dragon mark by killing Kano and freeing her Arcana) shows up to help Cole in the fight. Sonya uses her newfound power and fires an energy bolt at Mileena, which blasts through her chest, killing her.

Mileena in the movie is a young Afro-American woman. She wears black armor unlike her outfit from video games where she wears a pink suit. She appears to have the same teeth as a human, but he can extend them, showing her Tarkatanian teeth resembling her game appearance. 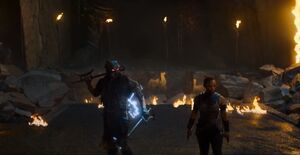 Mileena showing off her Tarkatanian teeth.

Mileena's hole in her chest.