Spy for the Volakia Empire.

Obtain the House of Argyle's spell that allowed them to reanimate corpses (failed).

Miles was an operative of the Volakia Empire, a nation located to the south of the Dragonfriend Kingdom of Lugunica. At some point, he was tasked with acquiring information on the "Sacrament of the Immortal King," an ancient spell that could potential used to revive the dead. To complete his mission, Miles posed as a merchant selling corpses to Bean Argyle. Bean was the head of the House of Argyle, the noble household who possessed a monopolization on information pertaining to the practice of the spell Miles sought.

Bean sought to use the Sacrament of the Immortal King to revive his late wife, who he had killed in a fit of rage two years prior. Miles agreed to procure corpses for Argyle while secretly taking note of aspects of the spell. Ultimately, his plans fell through when Duchess Crusch Karsten led a raid on the Argyle mansion that resulted in the death of Bean and his maid Hannah Rigret.

Miles, who had personally faced the Duchess, was gravely wounded. Grabbing a book of information compiled on the Sacrament of the Immortal King, Miles made his way back to the nearby border with Volakia, hoping to turn over what little information he had acquired to his superiors. However, his flying dragon was intercepted by the Master Swordsman Reinhard van Astrea. When Miles refused to surrender, Reinhard vaporized both him and his dragon on the spot. 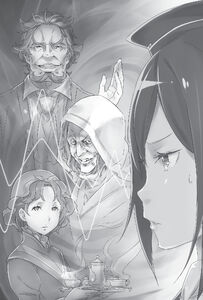 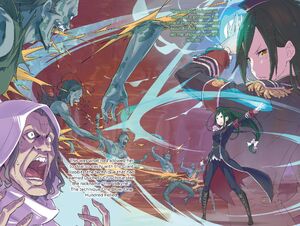 Miles watching in horror as Karsten unleashes the "One Blow, A Hundred Felled" technique on his zombies.