Capture Max Steel and absorb the T.U.R.B.O energy from him.


Use the Turbo Star to destroy Makino and take over the universe (both failed).

Miles Dread (sometimes misspelled as Miles Dredd) is the central antagonist of the 2013 cartoon Max Steel. He was once one of the co-founder of N-Tek with Max's father, Jim McGrath. After a freak accident, he was thought to be dead along with Jim but he had survived. He seeks to absorb the T.U.R.B.O energy from Max Steel and use that power to overthrow Makino and take over the universe.

In the 2016 film Max Steel, he appears as the main antagonist Miles Edwards, played by Andy Garcia.

He was voiced by Mark Oliver.

Miles Dread is a man who is obsessed with power. He desires to gain as much power as possible and has no care to how he gets the power. Miles does not mind who he uses and who he interacts with to gain power like organizing plans with the omnicidal Makino. He can sometimes be very harsh with his henchmen like his bio-android, Jason Naught, if he does not follow an order or fails him.

Miles was shown to be very manipulative and secretive even when he was with Jim McGrath (Ja'em Mk'rah). He really cared for taking over the world. Miles Dread also has an obsession with Max Steel and sees him as a source of power to help him gain a lot of T.U.R.B.O energy. Miles was also charismatic and sought to make deals with other villains like Extroyer to help him capture Max Steel.

Not much is known about Dread's early life before N-Tek's creation. He possibly came from a rich family, considering that he has endless amounts of money to pay his henchmen, such Colonel Jasper F. Castle and his army. It is possible that he was their financial banker.

Miles Dread later become one of N-Tek's founders alongside Jim McGrath, Molly McGrath and Forge Ferrus where the said secret agency was formed to protect Earth from Makino's forces. Known projects were the Turbo Star and Morphos, the last being cancelled due to its immense power. The team opted to use the Turbo Star. Though had done many missions and fought many battles alongside the organization, Miles himself absent during first Ultralink invasion and during that point, he managed to contact Makino and other Ultralinks and eventually managed to get his trust and become his ally.

Miles was planning on stealing the T.U.R.B.O energy from Jim McGrath with his unnamed T.U.R.B.O. Energy absorbing device, but it failed miserably as not only Jim wind up banished to outer space, but the device itself fused with his chest. After this incident, Dread somehow managed to escape and wasn't seen again. For some time, Dread went into hiding and became the CEO of the Trans Human Industries or THI. It seemed he later hired a man called Jason Naught to act as the manager of the Trans Human Industries while he remain in hiding, but it's later revealed that Jason Naught was bio-android he himself created when Max confronted him for the first time. While he remained in hiding, he was searching for the way for harnessing T.U.R.B.O energy.

Miles Dread finally discovered the way to synthesize T.U.R.B.O energy by converting it from Copper Canyon populate's life-force. But the device requires a living Ultralink as conduit. But every time that the Dread Naughts tried to get the device, N-Tek's forces came and destroyed their ships and themselves in the process. Angry, Dread knew that he wouldn't be able to get a T.U.R.B.O. Energy source and eventually would die, and his efforts would be in vain. Later, a THI Technician found a T.U.R.B.O. Energy source on Copper Canyon, who was Maxwell McGrath, Jim McGrath's son.

Instantly, Miles Dread asked to Fire Elementor get the T.U.R.B.O. Energy source. However, Fire Elementor fails in the mission and later Naught says the source disappeared due to Steel cloaked the energy signature. Once again angry, Dread sent Fire and Earth Elementor to Copper Canyon city to cause havoc and chaos in a intentional attempt of getting the T.U.R.B.O. Energy source. Eventually, despite Molly and Ferrus' efforts, Earth manages to capture Max.

On THI, Dread reveals to Max about his history, how he betrayed his best friend for an unlimited source of energy and also said about his plans of being powerful and later started to absorb the energy that Max generated after he got angry. For a time being, he thought he just only kept Max as his living battery as he revitalized himself and become stronger. Suddenly, Steel showed up and linked with Max. A brief fight ensues, but when he tried to escape on his Turbo Flight Mode, Dread grabbed Max's leg and separated Steel from Max. With Max escaped and Miles himself able to captured Steel, Miles decided to return to his original plan to synthesize more T.U.R.B.O. energy from Copper Canyon populate's life-force.

In spite of Max managed to save Steel and disrupt the process, it was too late, as Dread already become as powerful as he wanted. He tested his immense powers by destroying everything around him, including Copper Canyon's police and N-Tek's forces. Before it was too late, Max realizes that Dread couldn't absorb so much power and activates his Turbo Flight Mode and brings him to the stratosphere, where he manages to overload Dread with too much T.U.R.B.O. Energy, resulting him explodes and his device was damaged. He is rescued by Jason and vowed revenge. With it, his war with Max and co. has just began.

Miles Dread is a very powerful adversary that Max ever faced and pose a considerable threat as much as his reluctant allies Elementors. At first, he just an ordinary human with high intellect only armed with his own unnamed T.U.R.B.O. Energy absorbing device that can morph into powerful battle suit. He created the device back when working on N-Tek. When used, depending on the amount of energy it absorbed, the plates will expand, changing the appearance of those whom wear it, notably adding more body mass marked by more parts of the device in suit form glows.

The device gives various powers to Dread, depending if it is heavily loaded, or lightly loaded. When depleted of the energy, Miles' appearance with the suit looked frail and thin, but upon absorbed required energy, his body mass will increase, and will get new powers. In addition, the device can drastically change his appearance, but not getting various modes with specific abilities, like Max Steel's modes, but they are able to generate weapons of mass destruction. This piece of technology reminiscent with how Ultralink bonding works.

In the past, Miles planning on stealing the T.U.R.B.O energy from Jim McGrath but it failed miserably and nearly killed him: Whereas Max wind up banished somewhere in outer space, the device permanently embedded on the chest, making him had to depend on supply of T.U.R.B.O energy to survive and empowered himself.

Following powers and abilities that he gained with his device are: 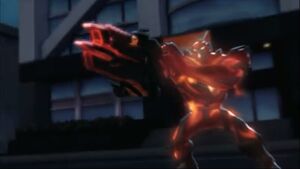