Controlling Unobtanium mining operations (even if it means to destroy Pandora's wildlife).

Get Jake Sully his legs back (originally, abandoned).

Kill Neytiri and the Na'vi.
Harvest the Unobtainium for the RDA corporation.
Get Jake to realize he is not a Na'vi (all failed).
Come back to live as an Avatar (succeeded)

He is the brutal and fearless head of the RDA (Resources Development Administration) corporation's security detail, being depicted as a fierce colonel that follows almost obsessively his military code. Under the subsequent orders of the RDA's president Parker Selfridge in the organization's militant tactics, Quaritch is willing to do whatever he needs to harvest the Unobtanium from the planet Pandora even if it means destroying its wildlife. Therefore, he became Jake Sully's archenemy.

He was portrayed by Stephen Lang, who also played Increase Mather in the TV series Salem, Norman Nordstrom in Don't Breathe, Percy "King" Dimplewade in The Nut Job, The Party Crasher in The Hard Way, Khalar Zym in Conan the Barbarian and Shrike in Mortal Engines.

Quaritch looked and acted like a lifelong military man. He wore his hair short and was covered with battle scars, most notably a trio of claw marks on the side of his head which he sustained during his time on Pandora. He only respected brute force and dominance, and showed little respect for the Na'vi or their home. He destroyed their Hometree, killing numerous Na'vi in the process, without hesitation - seeing it as merely a mission and remained mostly indifferent about the destruction.

His long-running military career was representative of his personality. He regularly worked out to offset the low gravity on Pandora so he did not get soft. He was in outstanding physical condition, despite being middle-aged, and he was known to leave his exopack back in his base for short periods when entering combat in the poisonous atmosphere of Pandora when he felt the situation demanded it. An expert with his AMP suit, he was still familiar with combat techniques as demonstrated by his marksmanship, hand-to-hand and melee combat skills.

Despite being a fierce, merciless, bloodthirsty and aggressive warrior, Quaritch claimed to "take care of his own" and appeared to have good relations with his men - who all seemed to respect him as an authoritative leader. However, he also acknowledged during an initial debriefing that he would be unable to help all of those under his command. He also shows great admiration for the dedication Jake Sully showed by willing to go covert with the Na'vi people and rewarded him greatly by promising him an operation that would give Jake his legs back.

Quaritch was also a charismatic and persuasive military leader, as shown by the way when he inspired his troops during the meeting before the assault on the Tree of Souls.

Miles Quaritch was the headstrong leader of the RDA security force. The government has gone through even more searches of valuable resources in the year 2154. He sent Marines and soldiers to the planet Pandora. In the universe of the movie, humans have advanced technology allowing them to even travel farther into space, even outside the solar system, despite not reaching the level of faster-than-light yet. They find Unobtainium, a valuable resource costing $20 million per kilogram, which is found only on Pandora, the home planet of blue-skinned humanoid aliens called the Na'vi who are taller than the humans.

Two years ago, Quaritch revealed the company's actual hostility toward Na'vi by tries to wipe out Na'vi children whom responsible for setting one of their bulldozer ablaze and destroyed Grace's school for Na'vis. Though Grace managed to save most of the children, Sylwanin and few children were killed during the gunfire and thus, Quaritch had the school closed for good.

One of the marines who came to Pandora was Jake Sully, whose legs were paralyzed. His organization created scientific technology that allowed troops to go into new bodies mixed with human DNA and Na'vi DNA called Avatars (which is what the movie is named after). He ordered Jake Sully, female scientist Grace Augustine, and xenoanthropologist Norm Spellman into the Avatar operation, where Quaritch planned the three to trick the Na'vi to move out of the area where Unobtainium is found. Quaritch also promised to have Jake's legs restored should he gather intel to him.

However, Jake, Grace, and Norm believed that stealing the land of the Na'vi was wrong, and tried to persuade the RDA to close the operation, but RDA's president Parker Selfridge had no feelings for the Na'vi, ordering almost all of his troops using large helicopter-like vehicles to destroy the Hometree of where the Na'vi clan, the Omayatica, lived when he and Quarith learned from one of Quaritch soldiers Lyle Wainfleet that the Omaticaya had destroyed their bulldozers to prevent them from cut down the jungle. Quaritch later imprisoned Sully, Augustine, and Spellman into a cell chamber after releasing them from the Avatar system chambers. Later, two other humans named Trudy and Dr. Max Patel also decided to help the Na'vi by releasing the three in the cell chamber and escaped in one of the flying helicopter-like vehicles. Miles Quaritch noticed this and used a gun trying to shoot them, but was only successful at shooting Grace Augustine.

Grace slowly died, which left Jake, Norm and Trudy left, while Max stayed at the home base where the humans had landed their vehicles on Pandora. Jake later formed an alliance with the other Na'vi, along with the leader's daughter, Ney'tiri. The next day, Quaritch and all of the soldiers came up ready for the war.

A conflict/war started between the RDA human squad and the Na'vi clans. The RDA squad had AMP suits that soldiers control with a large gun, giant flying vehicles that shoot missiles, several soldiers were on the ground with guns and a few giant flying battleship vehicles. The Na'vi clans rode on bird-like animals called Banshees, including a giant bird-like animal named Toruk Macto, horse-like animals named Direhorses, and were prepared with bows and arrows. While Quaritch and his soldiers managed to kill off Trudy and Tsu'Tey, one of the Na'vi, all of the soldiers were killed off except for Quaritch. He was on a giant flying battleship, which Jake destroyed by destructing the ship's flying generator, despite Quaritch's best efforts to stop him. Quaritch then quickly went onto an AMP suit and jumped out of the battleship before it crashed, saving himself. Now alone, he advanced to the Tree of Souls to destroy it himself once and for all.

Neytiri attacked and fought Quaritch by dispatching a giant panther-like animal called the Thanator. Quaritch lost his missile gun, but found a knife and quickly killed the Thanator by stabbing it with the knife. Before he could do the same to Neytiri, Jake came in his avatar body, declaring it all to be over and having him stand down.

Quaritch did not agree with the answer ("Nothing's over while I'm breathing!"), and attacks Jake with his knife while Jake used a broken part of the missile gun to shield himself from the knife. An intense fight to the death erupts between the two marines, in which they appear evenly matched. Quaritch also lost the blade of the knife, the only weapon he had. He then tries to destroy the avatar body system chambers to disable Jake in his avatar body but does not get the chance to when Jake almost stabs him with a knife at his right shoulder. Soon, Quaritch held Jake on his hair and was about to kill him in his Avatar body with the new knife.

However, Neytiri managed to aim two arrows at Quaritch, which killed him and caused his AMP suit to fall to the ground, ending with his menace and avenging the deaths of Grace, Trudy and all of the Na'vi who were killed by Quaritch and his soldiers. Jake and Neytiri united, with the Na'vi winning the war after Quaritch died. The RDA surrendered and returned to Earth, while Norm and Max also stayed on Pandora with Jake Sully, who had his consciousness transferred into his Avatar body permanently, proving that Quaritch was wrong when he told him that he would never be a Na'vi. 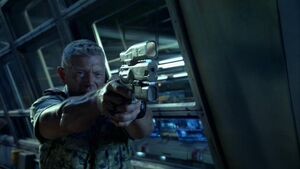 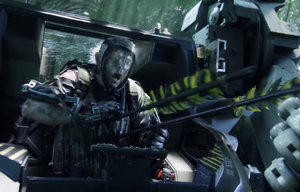