Whatever she is programmed to do.

Miley Ray Cyrus is an American actress and pop singer. She achieved wide fame for her role as Miley Stewart/Hannah Montana on the Disney Channel sitcom Hannah Montana and is parodied as a minor heroine-turned-minor antagonist from the animated comedy series Family Guy.

She was voiced by Candace Marie.

In "Hannah Banana", she first appears on Hannah Montana with her father Billy Ray Cyrus. At the end of the show, it was announced her tour as herself and Hannah Montana would be coming to Quahog soon.

Stewie admits that she is his idol and he would do anything to meet her. After sneaking backstage, Miley and Stewie become friends, and sing Stewie's song Friendship Is The Best Thing Ever.

He and Brian later find out that she is actually an android, programmed by Disney to be a perfect actor/singer on and off stage. Later Brian asks Stewie if he could program her to have sex with him. Stewie, hesitant at first agrees to do so, but he accidentally re-programs her to be a chaotic killing machine.

Later, she is seen destroying the city and kidnapping the Evil Monkey. She then climbs up the building with the monkey in hand and went to the top. After the climb Peter and Quagmire arrive in a biplane and shoot at her. After an epic fight, Miley is shot enough and falls off the building a la King Kong. 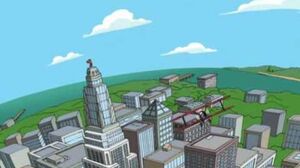 Retrieved from "https://villains.fandom.com/wiki/Miley_Cyrus_(Family_Guy)?oldid=3890808"
Community content is available under CC-BY-SA unless otherwise noted.