Villains Wiki
Register
Don't have an account?
Sign In
Advertisement
in: Collector of Souls, Anime Villains, Manga Villains,
and 35 more

Leader of the Clan of Noah

Master of the Akuma

Manipulating others by turning them into Akuma

Having dinner meetings with the other members of the Noah Family.

Find the heart of Innocence and destroy it.

The Millennium Earl is the leader of the Noah Family and the main antagonist of the anime/manga series D.Gray-man.

The Millennium Earl resembles a grotesque caricature of a Victorian gentleman: a rotund figure in cape and top hat, with a perpetual enormous grin and pince-nez spectacles. He has a set of large horns under his hat. This is merely the form he displays out in the open, however, as his true form looks more like a human wearing a cape and hat. Despite his intentions, he often displays a cheerful attitude, though in his true Noah form he comes across as more confident and malicious.

The Millennium Earl is the First Disciple of Noah, and supposedly the most powerful - his true name is Adam. 7000 years before the story, he battled an unnamed opponent wielding the Heart and won. Shortly after, the Great Flood wiped out all of humanity, and the remaining twelve Disciples founded the second generation of humanity. As a result, all humans possess Noah genes. Once every generation, the genes and Noah memories within thirteen people will awaken, transforming them into Noahs and compelling them to help the Earl in fighting the Innocence; the Earl comments on them "protecting" him.

Around 35 years before the series started, a Noah, known as " The 14th Noah" killed all but Road and the Earl, leaving the Earl crazed until the other Noah began to reappear. The 14th Noah betrayed the Noah and attempted to kill the Millennium Earl hoping to take his position. However, the attempt failed with the Earl killing the 14th.

When Mana, the 14th's older brother died, the Earl tricked his adopted son, Allen Walker, into turning him into an Akuma. Much to the Earl's surprise however, Allen had Innocence and it activated to kill the Mana's Akuma form. The Earl simply left as this happened instead of killing Allen, an act the Earl later came to regret and continually questioned himself about. It is implied that the Earl is still feeling the aftermath of his fight with "The 14th" as seen when he doubles over in pain or begins to cry from time to time.

The Millennium Earl deceives those who are in grief over dead relatives and friends into creating Akumas. He is a sorcerer from long ago, and he plans to lead the world to its death. In the anime he is shown to have a split personality - the first is his normal cheerful, friendly, and happy attitude, almost like a friendly old uncle. With the Noah, he's a member of the family, and is particularly playful and affectionate towards Road. His other personality is one of sheer, sadistic malice, capable of happily playing with people's lives. He also seems to invariably uses polite Japanese. In the manga, almost every one of his lines of dialog ends with a heart. During Cyril Kamelot's dinner party, the Earl in his human form appeared far more stern, addressing the issue of the Akuma Egg and the Heart in a serious manner; he appeared to be frowning, and he didn't end any of his sentences with a heart. Throughout the series, he also expresses regret that he didn't kill Allen when he had the chance. 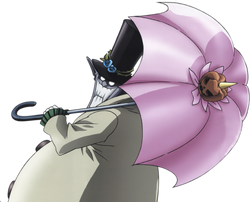 The Earl and Lero 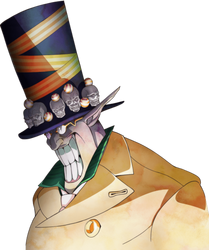 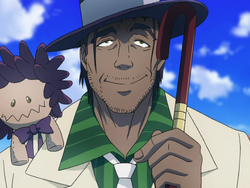 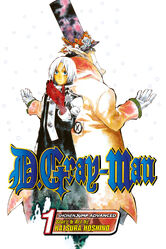