Plunge the world into an endless state of war and push humanity to the brink of extinction (failed).

Millennium is a Nazi organization seeking to create an army of artificial vampires and the main antagonistic faction of the manga series Hellsing and its anime OVA adaptation Hellsing: Ultimate. Its name is a reference to the "Thousand Year Reich" which Adolf Hitler sought to establish during World War II. This organization consists of about 1000 SS soldiers.

Millennium's researchers have discovered a way to transform humans into vampires through unknown means, though it is suggested that some kind of surgery is involving implanting computer chips. Following the end of World War II, the mysterious group pools its resources and, with substantial help from the Vatican, is able to relocate to Brazil to go into hiding.

Millennium was founded by "Hitler's Special Order #666", as a means of researching and using supernatural phenomena for military purposes. In 1944, their grand project of creating a vampire army was foiled by a 14-year-old Walter C. Dornez and his accomplice, Alucard (who at the time had taken on the form of a young girl).

In the current storyline (set in 1999), Walter and Alucard claim to have "killed everyone there" and put an end to their experiments, but exactly what happened during these events remains to be seen. It is apparent that they did not, in fact, kill the Major, the Doctor, the Captain, Lieutenant Rip Van Winkle or indeed any of the top Millennium brass. Furthermore, the current status of their supposed source vampire (an unnamed female referred to only as "She") was unknown until recently. Chapter 94 of Hellsing reveals that 'She' was in fact Mina Harker. As Alucard was not killed by Van Helsing, Mina did not become fully human and thus, Millennium were able to extract some of her blood which contained Alucard's essence and used this as a base for all their artificial vampires.

The events that took place in 1944 are told in Hellsing: The Dawn, an ongoing prequel to Hellsing. After this event, Millennium began to plan their escape. Some time after the end of the war in Europe, most of the members had left for South America, taking with them a battalion of 1,000 Waffen-SS volunteers. This was known as the "Letztes Bataillon", translated in English as the "Last Battalion", a secret weapon to be used in a future conflict. They also brought with them a massive amount of valuables taken from victims of the Holocaust, as well as an assortment of advanced weaponry, such as V-1 flying bombs and advanced Zeppelins in which to convey their forces. Millenium soldiers are equipped with World War 2-era German weapons and clothing, including Kar98 bolt-action rifles, MP40s, STG-44s, Stick grenades, Panzerfausts and Panzerschreks, as well as Stahlhelms along with SS-issue greatcoats.

Millennium initially stayed hidden in the shadows, first by observing the Hellsing organization's capabilities by attacking it with ghouls (and devastating it in the process). They were first discovered when Warrant Officer Schrödinger delivered a message to Hellsing Manor. The Major declared war on them, to which, strangely, Alucard gladly accepted, being eager to destroy them again. The invasion of London began after occupying a Royal Navy carrier (which in turn was destroyed by Alucard), arriving at the city at night. Unbeknownst to the civilian population, Millennieum also jammed the entire British military's communications, rendering them unable to respond nor even know what was going on. V1 and V2 bombs were shot all over London as hundreds of Nazi troops descended from the Zeppelins, massacring everyone on sight. British police officers attempted to fight back though were quickly wiped out as bullets had no effect on the vampire soldiers.

Sir Integra Hellsing was also pursued by a platoon of Millennium troops, though the chase was a failure when Father Alexander and a force of armed Iscariot paladins arrived in the nick of time, wiping out the vampire soldiers in seconds. The organization then attacked Hellsing manor under the command of Zorin though the attack was initially a disaster, Seras Victoria having shot down their Zeppelin with AA cannons. Despite this, the survivors, behind halved in number and having lost all their heavy equipment, continued to attack, only to fall into a minefield set up by Captain Pip's Wild Geese troops. Ultimately, the Millinnieum forces were able to bypass the minefield and destroy the Wild Geese almost entirely, but were wiped out by Seras Victoria who also managed to kill Zorin Blitz in a brutal duel. While in London, Millennium found itself facing another enemy; the Iscariot Organization led by newly-appointed Archbishop Enrico Maxwell, which arrived with a far larger army backed up with gunships. Both forces engaged in a fierce clash until the arrival of Alucard. By then, Millennium's manpower was largely depleted, numbering only 572 troops. Much of the survivors were then wiped out by Alucard's undead army along with the Iscariot knights.

Millenium has no clear goal, as described by the Major. According to him, their only purpose is to wage war. The Major often tells his troops that their operation is executed as vengeance for their defeat 54 years ago - both against England and the Hellsing Organization - when in fact, his goals are much smaller. He states that by pouring in so many vampiric soldiers, by slaughtering the Wild Geese and the people of London, and by drawing in the massed Vatican forces, he planned to sacrifice them all to kill one being - Alucard. 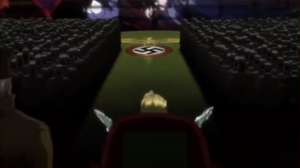 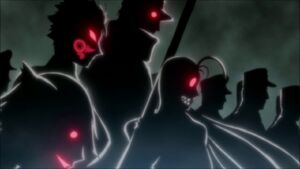