Hiding her stolen wealth in her shell.

Get away with the Knight's Geo and use it for her own satisfactory needs (failed).

Millibelle is a minor antagonist of Hollow Knight. She is a kind and trustworthy elderly banker bug who protects her visitors' Geo, the currency of Hallownest, inside her small bank stand located in Fog Canyon. However, it is all a scam, as Millibelle is actually a cunning thief who tricks others into giving her their Geo using her "bank".

Millibelle is found in the left room at the base of the Fog Canyon. When first interacted with, she explains to the Knight that she was about to close shop due to a lack of visitors, but is happy that someone came back and decides to keep her bank running. For a 100 Geo fee to open their account, Millibelle provides a service to keep the Knight's Geo safe. All of the Knight's deposited Geo will always remain safe inside Millibelle's bank, even after death. Her Geo can also be deposited or withdrawn at any time whenever the Knight visits.

Millibelle can hold up to a maximum of 4,500 Geo, but once 2,550 Geo or more is deposited into the Knight's account, she will vanish from her stand after the Knight leaves and rests on a bench or uses a Stag Fast Travel.

Where Millibelle ran off to is the Pleasure House located in the City of Tears, which requires a Simple Key to unlock. In the room above the ghost of Songstress Marissa is the City of Tears hot spring, where Millibelle is residing. At first, she attempts to tell the Knight that she spent all of their Geo, but hitting her with the Nail causes her to drop all of the Knight's deposited Geo by the hundreds. She also drops an additional number of Geo based on roughly half the amount of the Knight's deposited Geo, up to 2,250. 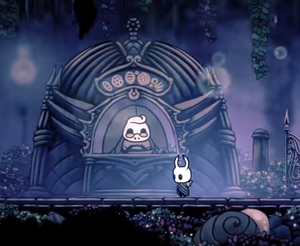 Millibelle sitting at her "bank". 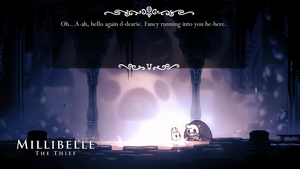