9th Ranked Assassin of the UAA, President of the Santa Destroy Bank

Killing, Gloating on how much he loves money

Kill Shinobu to get to Travis. Kill Travis and keep his rank

The Million Gunman is the 9th assassin in No More Heroes 2: Desperate Struggle.

Million Gunman's appearance is a somewhat tall and skinny old man with gray hair, wearing a gray suit with a bit of red.

Unlike some of the other No More Heroes characters in which some have a backstory, Million Gunman has no backstory. The only thing we know about him is that he's the President of the Santa Destroy Bank. He's also probably one of the richest men in Santa Destroy because instead of using bullets like a regular gunman, he shoots out money.

He and Shinobu fight each other in the Santa Destroy Bank. His main weapon is a golden handgun that shoots out ricocheting coin bullets. When fighting him he tries to dodge Shinobu's blade. In the end of the fight he loses both his arms from the elbow down, asking who she is. Shinobu slices his head off and tells her name and slices Million Gunman's head into pieces. 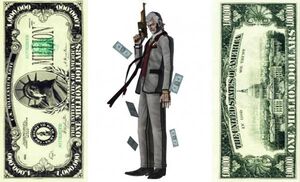 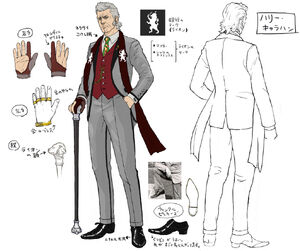 Retrieved from "https://villains.fandom.com/wiki/Million_Gunman?oldid=3527311"
Community content is available under CC-BY-SA unless otherwise noted.