Eating tangerines.
Writing in her diary.
Daydreaming of men and gems.

Help Count Bleck in his plan to create a perfect world.

Mimi is one of Count Bleck's minions and a supporting antagonist in the videogame Super Paper Mario, making her first appearance in the second chapter of the game. She is a shapeshifter, which she uses to confuse the heroes several times. She normally takes the form of a small and innocent looking little green girl. When she battles the heroes head-on, she assumes her spider form, whose legs must be knocked off to be defeated.

Don't be fooled by her cute looks! Mimi is a deceiver. She uses her cute appearance to lure those who meet her into traps. When the traps have their trigger tripped, she strikes the victim, often shocking him.

In her normal state, Mimi appears as a girl with green skin and consistently wears pigtails as her hairstyle. Her battle form resembles a spider. She wears different outfits depending on when she is encountered. Her eyes are black dots.

In Chapter 2, Mimi poses as Merlee's handmaid, and tries her best to trick Mario into a spiked room, but the hero escapes and gets a key using his dimension-flip ability, and releases Merlee's pet Gnip, Gnaw, which chases Mimi off. She later tricks Mario and Peach into breaking a vase and forces them to pay it back in a million Rubees, but they found her secret stash of Rubees and paid the loan in full, breaking her curse on the mansion. They eventually fought her in the basement of Merlee's house, where she transformed into Merlee and had Mario ask her and Merlee each five questions, to guess who was Merlee and who was Mimi. Regardless of whether or not the player chooses the real Merlee, Mimi will reveal herself and transform into a spider-like creature known as True Mimi, and fight Mario and Peach.

To defeat her, they must jump on her head to stun her, then jump on her again to make one of her six legs fall off. After all six legs were knocked off, Mimi was defeated.

Mimi was later talked by Dimentio into attacking Mario at Sammer's Kingdom, despite direct orders by Count Bleck to remain at Castle Bleck. She fought them in her humanoid form this time, often protected by a shield of Rubees, but using Thoreau, Mario, Peach, and Paper Bowser were able to grab the Rubees and throw them back at her. However, this battle was just her way of stalling for time, as the world was already on the verge of collapse.

She is fought a final time in Part 2 of Castle Bleck. She pretends to be Merlon and tricks Mario, Peach, and Luigi into falling down a trapdoor (Bowser was lost during a fight with O'Chunks), and later pretends to be Merlee and asks them what they hate the most (giving them choices of an easy enemy, a hard enemy, or an item). Ironically, Bowser (who is currently absent) employed the same tactics in the first Paper Mario. Eventually, Mimi made fun of Peach for having to be rescued by Mario and Luigi, so Peach fought Mimi one on one. Mimi transformed into her spider form but was defeated. Afterward, the floor collapsed, and Peach held on to a side of the room, while holding onto Mimi to keep her from falling, but ultimately lost her grip and both plummeted into the abyss below.

It is later revealed that Peach and Mimi survived, as they landed on top of Bowser. After Dimentio supposedly killed Nastasia and teleported her, the weakened Count Bleck, and Tippi to Dimension D, Mimi and O'Chunks came to Dimension D and they, Tippi, and Bleck used the power of the Pure Hearts to negate Super Dimentio's invincibility, thus giving Mario, Peach, and Bowser the chance they needed to destroy him once and for all. However, he left behind a shadow of his power to control the Chaos Heart. Mimi and the others witnessed Count Bleck and Tippi's marriage in order to stop the Chaos Heart and close the Void. 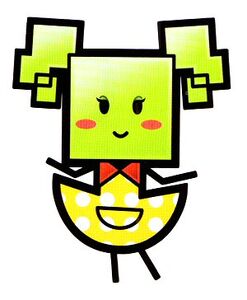 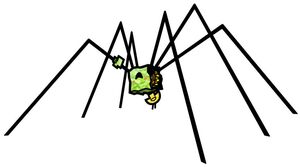