The Mimic Master is a minor antagonist and a boss in the video game Kingdom Hearts: Birth By Sleep. It is a humanoid Unversed monster that serves as a recurring boss in the Mirage Arena.

The Mimic Master was created by the negative emotions of Vanitas, and is a manifestation of dark emotion and thought. It resides in the Mirage Arena, where it can be fought in the Dead Ringer and Copycat Crisis challenges.

The Mimic Master uses its giant book for magic and physical attacks, including shooting light and dark beams, flying with fire, disappearing inside of the book, and slamming it down as a melee weapon. It can also use the book to suck in enemies and create copies of them. While these copies have little health, they have all the same abilities as the original and serve the Mimic Master. Once defeated, the player can move onto the next challenges. 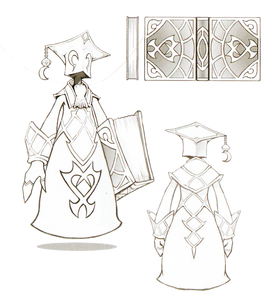 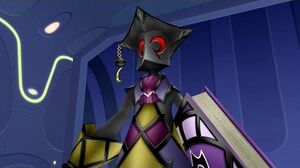