Helping Trina no matter what (formerly)

Mina Beff is the on/off secondary antagonist of the show Grojband. She often helps out Trina Riffin in her evil plots, but mostly doing it out of fear, mostly due to Trina being mean to everybody around her and treating Mina as little more than her henchwoman instead of as a friend, though she has been social with Corey and friends at times. She is also the older sister of Carrie.

She is voiced by Denise Oliver.

Mina is 16 years old. She is Trina's best friend in fact, her only friend. Trina is very rude and abusive to Mina and treats her like a slave. Mina's original name was Bernadette, but Trina forced her to have her name legally changed to Mina so their names would rhyme. Although Mina is always getting stepped on by the bossy Trina, she enjoys the "rub-off" popularity she gets for being by her side. In the episode "Space Jammin'," it was revealed the Carrie is Mina's little sister. Although it has never been seen much in the show, this means that they must have a strong relationship with each other. Carrie is 13, while Mina is only 14.

In the episode "A Knight to Remember", she becomes the main villain after a comet has passed. Mina then became a bratty princess with Trina as her right-hand girl. After an actual giant knight crashes the party, she demanded others to stop it, showing no regard for their lives. Eventually, she goes into Diary mode (similar to Trina's). When the comet passed again, she and Trina went back to their normal selves. She got chased by Trina afterwards.

In the episode "Hear Us Rock, Part 2", Mina became fed up with being pushed around and bullied by Trina, so she stood up to her and took charge, making her the one on top while Trina was her abused sidekick and slave. It is unknown if this relationship will continue on like this in the second season of Grojband or if Trina will go back to being the one on top after this.

She is a nice, shy, and timid girl that is loyal to Trina and does whatever she commands. According to the series creators, she and Trina genuinely care about each other (having been friends since kindergarten) and Mina endures all Trina's abuse in hopes that Trina will one day go back to being the nice person she used to be.

Mina is a really nice and selfless girl who is always being nice to anyone no matter who they are and what they do. She seems to be friends with Trina and at the same time, is being nice to her worst enemies. She doesn't seem to care when she gets abused and hurt, which is seen mostly when it shows how terribly Trina hurts her.

No matter how much she gets disrespected by someone, she will always continue to respect and be nice to that person. She is also very intelligent and great at math she is a super nerd who is part of the nerd club at Elementary High. 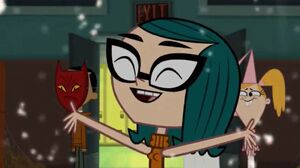 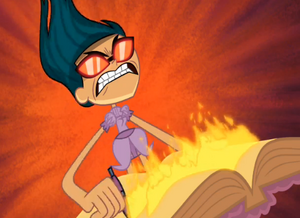 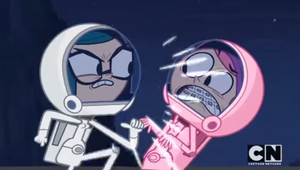 Mina standing up to Trina.
Add a photo to this gallery

Retrieved from "https://villains.fandom.com/wiki/Mina_Beff?oldid=3967371"
Community content is available under CC-BY-SA unless otherwise noted.