Flight (with a jetpack)

Skilled use of power suit
Telepathy

Hanging out with Crimson Countess.

Mind-Droid is a minor antagonist in the controversial comic book series The Boys. He is a member of Payback, and he also is in a romantic relationship with Crimson Countess. He is seen as a robotic superhero, but he is actually a human in robotic suit.

Mind-Droid first appears in a Tek Knight's flashback, where Tek Knight attempted to rape him.

Mind-Droid then showed up with the rest of his teammates attacking The Boys. Billy Butcher grabs a brick and hits Mind-Droid in the face. When Crimson Countess is killed by Billy Butcher, his teammate Swatto asks him what's wrong with her, but horrified, says he can't read her mind literally as if she had been turned off. Mind-Droid and Swatto then finds her dead, and Mind-Droid is upset about it, and tells how Vought have sent them to kill people like The Boys.

Mind-Droid notices that it can read the mind of one of The Boys. Unfortunately, Billy Butcher was in the same room, and he took the pickaxe and broke the glass with a brick. When they spot him, Billy Butcher throws broken glass at Stormfront's eye, and Stormfront flies away furiously.

While the rest of them wonder what to do, Butcher's dog Terror runs past them, confusing them. Soldier Boy and Mind-Droid notice that Swatto disappeared somewhere. Soldier Boy and Mind-Droid find Swatto with a pickaxe in his mouth, and they run away in horror at the sight. Mind-Droid and Soldier Boy stops running, but Butcher stabbed Soldier Boy with shovel, cutting his ear off. Butcher then uses the shovel to hit Mind-Droid, causing him to fall to the ground. A terrified Mind-Droid begs Butcher for his life and says that he is not a robot, but a human in robotic suit. However, he tells him that he knows about it and cuts his head off with a shovel. 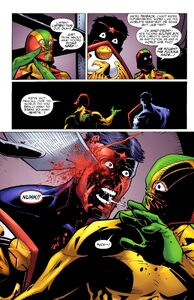 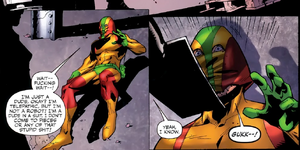