Supreme inhabitant and ruler of the Upside Down

Hive Mind for the Demogorgon and Demodogs

Telepathic speaking
Spying (through Will Byers)

Obtain Will Byers as a vessel (succeeded for a while; eventually failed).

Destroy all of humanity.

The Mind Flayer, also known as the Shadow Monster or simply "Him", is the main antagonist of the Netflix series Stranger Things. It is an enormous shadow-like being that rules a supernatural dimension called "The Upside Down" and acts as the hive mind for the Demogorgon and the Demodogs.

He was portrayed by Noah Schnapp when the Mind Flayer was possessing his body.

The Mind Flayer spreads over Hawkins via vines that are drilling themselves through the earth in the forests near the city, creating an immense unseen vine network beneath the surface. During the season, it is temporarily able to trap Chief Hopper there, although Hopper can be saved in the last moment. It also starts developing several dog-like creatures similar to early development stages of the Demogorgon, later dubbed Demodogs, as an invasion force. After its vines are found by Chief Hopper and his allies, the Mind Flayer uses his influence over Will. He manipulates all others into believing that Will has had a hallucination of the central weak point of the vines. When the security team of the Hawkins Labs turns up there, however, it is revealed to be a trap and the team is slaughtered by the Demodogs which then round up and storm the laboratory itself. During the attack on the laboratory, Will is injected with a sleeping serum so that the Mind Flayer cannot see the enemies movements through his eyes.

To prevent the Demodogs from multiplying and attacking the city while also preventing the Mind Flayer vines to reach the city, Mike convinces the team that the Mind Flayer needs to be eliminated as the Mind Flayer serves as the hive mind to all the monsters. They believe that Will holds the key to defeating the beast and plan to wake him up. However, they first prepare an anonymous room so that Will - and by extent, the Mind Flayer - won't know where Will is located. After Will is woken up, the Mind Flayer attempts everything in its powers to convince the group to free him from his restraints while individual party members try to get through to Will. Despite being under the influence of the Mind Flayer, Will is able to relay the message "Close Gate". They assume that this means that the Mind Flayers influence on earth and Will is finally severed once the gate is closed. When suddenly the phone in the room rings, Will recognizes the ringtone and the Mind Flayer realizes where Will and the group are located. It immediately sends out its army of Demodogs to slay them all. Although the beasts manage to swarm the house, they are all killed by Eleven before they have the opportunity to enter.

While preparations are taken to bring Eleven into the lab in order to close the gate, the team also makes plans to make Will's body uninhabitable for the Mind Flayer so that he will leave Will before the gate is closed. The team splits into three groups. Hopper brings Eleven to the lab. Will’s Mother Joyce, Nancy, and Will’s brother Jonathan attempt to free Will. Mike, Dustin, Lucas, Steve, and Max create a distraction by burning the vines underneath the surface. Joyce and Jonathan realize that the Mind Flayer cannot stand warmth so they heat up the room, causing the Mind Flayer to scream in pain through Will's mouth. Although Will is clearly in pain, the group endures and the constant pain causes the Mind Flayer to directly act through Will. He bursts free from his shackles and attacks Joyce, starting to strangle her. To free the woman, Nancy burns Will with a heated iron rod, causing him to drop Will's mother. The Mind Flayer flees from Will's body and exits it in a gust of shadowy smoke and flees the hut.

Mike and the rest of the gang successfully reach the center of the vine system, where the Mind Flayer protects itself by having several bulbs blasting out spores as a defense mechanism. They drench the entire system in flammable liquids and burn it down. This causes the distraction they hoped for, alerting the Mind Flayer to the attack and causing it to draw off the Demodogs from the institute. This makes the way easier for the first group. Hopper and Eleven reach the center of the institute where the path is now clear. Eleven uses her powers to close the gate to the Upside Down, banishing the Mind Flayer for good. Although it once more tries to breach the gate while Eleven is sealing it, it is unsuccessful in its attempt and remains trapped in the Upside Down. With the Mind Flayer sealed away, all Demodogs on Earth drop dead immediately.

Despite having been banished back to its own dimension, the Mind Flayer is still very much alive and still seems to have intentions to invade Earth once more. 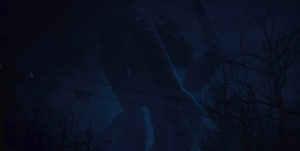 The Mind Flayer appearing to Will. 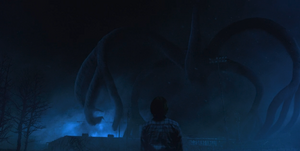 Will standing his ground against the Mind Flayer. 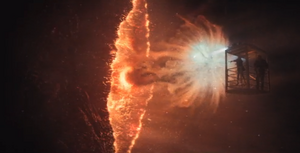 Eleven repelling the Mind Flayers last effort to breach through. 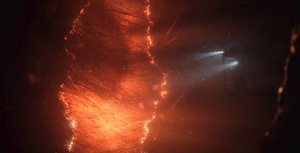 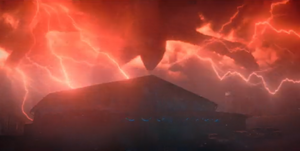 The Mind Flayer back in the Upside Down. 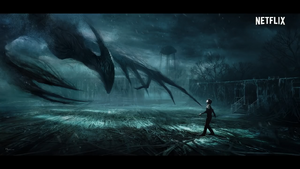 the mind flayer is about to possess will (concept art) 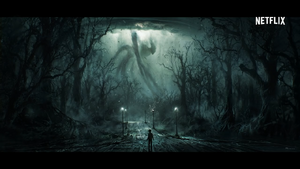 Retrieved from "https://villains.fandom.com/wiki/Mind_Flayer?oldid=3131785"
Community content is available under CC-BY-SA unless otherwise noted.