Help the Suicide Squad destroy the terrorist group Jihad in Qurac and escape the compound (partially successful, then failed).

Mindboggler is a supervillain in the DC Comics universe. She is an enemy of Firestorm and was given powers by Breathtaker (DC) of the Assassination Bureau. Her powers allow her to create convincing illusions and induce feelings in her victims. This leads her to become a high-priced assassin for hire, although she has also sometimes worked with heroes.

Mindboggler was a criminal that fought against Firestorm on a few occasions, usually losing to him. After some time in jail, she decided to take the Squad up on their offer. Right after their debriefing, but before the actual mission, Mindboggler used her power of illusion on Captain Boomerang after he sexually harassed her other teammate Plastique, embarrassing him. He swore he would have his revenge on her.

The terrorist group Jihad later used a digital assassin called Ifrit, similar to their earlier member Djinn (DC). Ifrit had the appearance and personality of Mindboggler. She was used to attack the Suicide Squad. Mindboggler later returned as a member of the Black Lantern Corps. 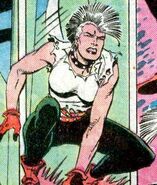