Criminal
Mindi Stiles is one of the supporting antagonists of the videogame Scooby-Doo! Mystery Mayhem, alongside Walter Peabody and Robert Zabrinski. She is voiced by Grey DeLisle.

Mindi was summoned by Robert Zabrinski to sabotage a park and scare the workers and visitors there, so Zabrinski could buy it. She also disguised herself as the Pink Princess. The brochure of a theme park was found, and the mystery gang went there to investigate. They met Johnny Channayakpatra, owner of the park, and Mindi Stiles, the only employer left working. Johnny explained that the theme park was haunted by mummies.

The group split up once again. Shaggy Rogers and Scooby-Doo found a picture of Robert and Mindi dancing in the Salon and a one-way train ticket for Mindi. Hiding in the shadows, they were stalked by a mysterious woman in a masquerade-like dress. She was revealed to have powers, and accidentally turned herself into the Dustdevil. Shaggy and Scooby used the Tome of Doom to fight against her.

She was defeated, and revealed to be Mindi. She explained that Robert was also trying to buy the theme park, and she released mummies to scare visitors and employees away, by using pages of the Tome of Doom. Meanwhile, at a secret headquarters, a woman received word that Walter Peabody and Robert had been arrested. A mysterious figure called them all "weak links" and decided to move on with "the plan". 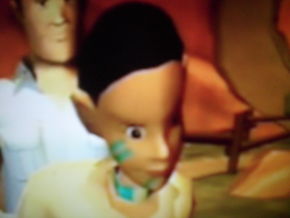