Ruler of the Universe

Spreading oppression all across the entire universe.

Ming the Merciless, also simply known as Ming or Emperor Ming, is the main antagonist of the Flash Gordon franchise.

He is the Emperor of Mongo and the archenemy of Flash Gordon. He is the blasphemous and tyrannical dictator of the planet, who is bent on the conquest of the planet Earth. When Flash Gordon and his companions, scientist Hans Zarkov and Dale Arden traveled to Mongo to prevent its collision with Earth, they were captured by Emperor Ming's forces. Soon, Emperor Ming's megalomaniacal views brought him in conflict with the earthlings. He has become a staple of the "Flash Gordon" mythos appearing in every incarnation.

In the 1980 Flash Gordon film, he was portrayed by the late Max von Sydow, who also played Joubert in Six Days of the Condor, Lamar Burgess in Minority Report, Varden Reynard in Rush Hour 3, Ernst Stavro Blofeld in Never Say Never Again and Brewmeister Smith in Strange Brew.

Ming the Merciless was introduced in the original 1934 run of the "Flash Gordon" comic strip written and drawn by the late Alex Raymond in the newspapers. He got introduced as just "The Emperor" and immediately expressed desire to marry Flash's female companion Dale Arden. He forced Gordon into slavery and later forced him to fight in the arena. His daughter by the name of Princess Aura fell in love with Flash Gordon and joined him in his fight against her father.

Eventually, Ming got overthrown by Flash and his allies during the ceremony of marriage. Prince Barin became Mongo's new ruler.

When the comic strip got adapted in serial format for the cinema's in the 1936 serial: "Flash Gordon " the role of Ming the Merciless was played by the late Charles B. Middleton. He was characterized as ruthless and slightly based on the character of Dr. Fu Manchu. Middleton reprised the role in two sequel serials: "Flash Gordon's Trip to Mars " (1938) and "Flash Gordon Conquers the Universe " (1940). This interpretation of Ming became one of the most well-known in pop culture for years to come.

In 1979, Filmation produced an animated series based on the comic strip. Ming the Merciless' voice was provided by the famed voice actor Alan Oppenheimer. In the series, he was known as a brilliant scientist and ruthless warlord who had a robot army to his disposal. He would engage in personal combat more than Middleton's incarnation. He was dispised my most races on Mongo but exacted control over his subjects due to the hatred between those races.

In the 1986 animated show "Defenders of the Earth", a more unstable and green-skinned version of Ming the Merciless served as the main antagonist. He faced off with Flash Gordon, The Phantom, Mandrake the Magician  and other Golden Age comic strip heroes who came together in the show and had an army of "Ice Robots". He was voiced by the late Ron Feinberg.

Max von Sydow's portrayal of Ming left a deep impact on popular culture and is regarded as the most popular version of the character. Max von Sydow played him as a sociopath and megalomaniac while keeping the character courtly and elegant. Emperor Ming possessed a magical ring in the film with which he could force his will on others. He had an as close associate, his Admiral, Klytus. He was also depicted as more sexual in nature.

At the end of the film, Ming appears to die after being impaled by a rocket ship but his laugh is heard just before the credits. The idea for a sequel was established but never produced.

Max von Sydow's portrayal of Emperor Ming has become a beloved and well-recognized one.

In 1996, another animated television series based on "Flash Gordon" was produced by David J. Corbett in Canada. It depicted Flash and Dale as teenagers in a more futuristic setting. In this version, Ming was more reptilian and monstrous with an army of Lizard Men.

This depiction of Ming was also the widower of a deceased wife.

In 2007, a 21-episode live action television series was produced for the SyFy Channel, loosely based on the comic strip of the same name. The series followed "Steven Gordon" and his scientist companion Dr. Hans Zarkov, who discovers the existence of Mongo and its dictator Ming, in this series a white, brown-haired male who controls his subjects over holding the only clean water supply.

Ming was portrayed by John Ralston.

Ming the Merciless is regarded as one of the classic comic strip villains. He has also become a famous wicked archetype. In the past, there have been claims of racism due to Ming's obvious Asian influence but the Flash Gordon series and its main villain have stayed popular since 1934.

Ming the Merciless was parodied in the British satire program "Big Train" in 1998 and later in the 2012 comedy film Ted (when Sam J. Jones was with high and started to hallucinate that Ted's Chinese neighbor Quan Ming was Ming the Merciless).

A photo of Ming features in the first episode of season 3 of the 1990s Irish comedy series Father Ted. Ming's appearance is in a slideshow run by Ted at Craggy Island's pub, to prove that he is not a racist (Ming is often thought of as a negative portrayal of Chinese people, as the episode, entitled Are You Right There, Father Ted?, centered around Ted accidentally being racist towards Craggy Island's Chinese community).

In LEGO Minifigures series 13, the Evil Wizard is modeled after Ming. 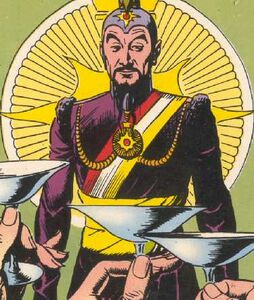 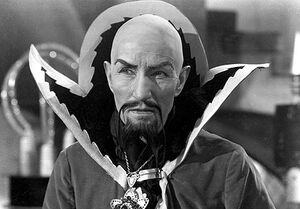 Charles B. Middleton as Emperor Ming in the "Flash Gordon" 1936 serial. 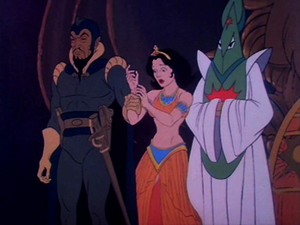 Ming the Merciless with Dale Arden in the Filmation "Flash Gordon" animated series. 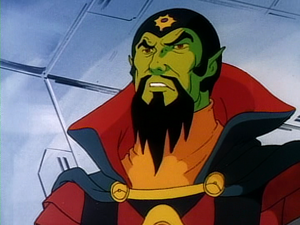 Ming in the "Defenders of the Earth" animated series (1986). 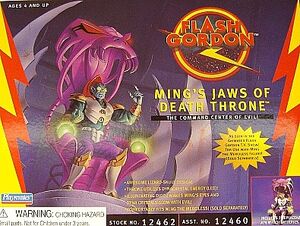 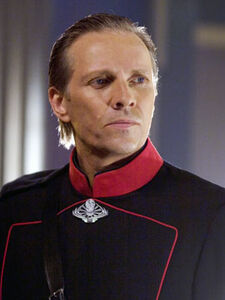 John Ralston as Ming in the Flash Gordon 2007 series.
Add a photo to this gallery

Retrieved from "https://villains.fandom.com/wiki/Ming_the_Merciless?oldid=4007588"
Community content is available under CC-BY-SA unless otherwise noted.