Help Zim take over the Earth.

Mini Moose is a supporting character in The Most Horrible X-mas Ever of Invader Zim and a major antagonist in the 2019 Netflix film Invader Zim: Enter the Florpus. It is a robotic moose created by Zim who has grown tired of GIR's stupidity and made a replacement sidekick, but still keeps him.

In Enter into the Florpus, the Mini Moose thinks Zim is cool but apparently isn't above using his oratory skills to trick Zim in order to get out of trouble, suggesting that Minimoose has a manipulative side.

Mini Moose first appeared in The Most Horrible X-mas Ever where it helped Zim to formulate a plan to destroy the humans during Christmas, but failed because of Zim being freed by Dib from the suit, accidenatally killed Santa Claus. Zim, now dressed as the "Easter Platypus", convinces the human race that Dib killed Santa and they all tackle him.

Minimoose has a major role in the film, as Zim stated that he's the "only being in the known universe" to have the ability to channel cosmic energy into the Membracelets, which is key both to Zim's plan to transport Earth into the path of the Irken Armada, and later to enabling Professor Membrane undoing it. After the latter occurs, Zim initially blames Minimoose for his plan's failure, but quickly forgives the moose. 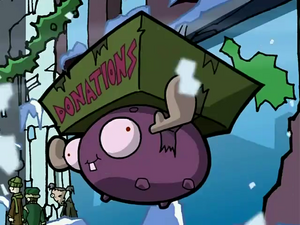 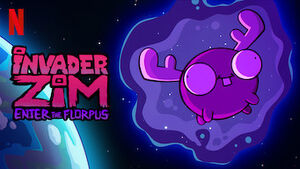 Mini Moose in a movie poster. 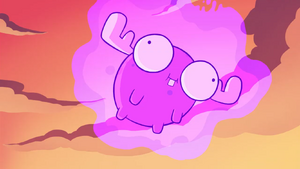 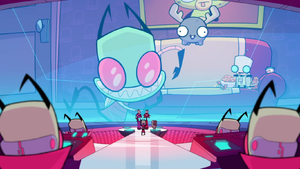 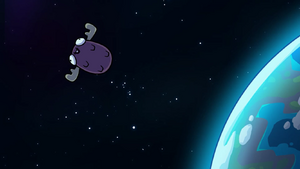 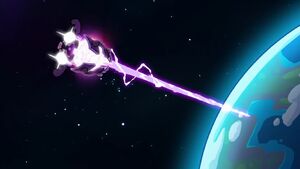 Mini Moose transforms into a channeled cosmic energy and warps the Earth.
Add a photo to this gallery

Retrieved from "https://villains.fandom.com/wiki/Mini_Moose?oldid=3774737"
Community content is available under CC-BY-SA unless otherwise noted.