Get revenge on Calypso

Minion is a demon hunting for Calypso and an antagonist from Twisted Metal.

He was voiced by Peter J. Macon.

Minion was determined to get Calypso, because he apparently stole his wish-granting powers from the demon 11 years previously. However he joined the Twisted Metal tournament to have his revenge on Calypso. In his ending, Minion confronted Calypso and snarled that he was coming with him. Calypso tried to work out a deal, but Minion said he had stripped him of his birthright and it was time to face the consequences. The demon opened a portal to Hell as Calypso pleaded for mercy and told him that it was time for him to rot in Hell with his younger sister, before dropping Calypso inside.

Minion was a demon enslaved by Calypso to use in his tournament, but he set out to hunt down his former master. In his ending, Minion’s wish was to spend the rest of eternity in Hell, but Calypso sent him to Hell, Michigan, where it was constantly snowing.

Minion drives a powerful tank, which has both high speed and armor. In addition to its normal weapons, his tank can fire trios of homing missiles, along with a missile that freezes the opponent.

While Minion's appearances are limited and his goal varies in games: Twisted Metal 2 characterized him as intimidating and vengeful, promising to hunt down and punish Calypso for stealing his "birth-right". Twisted Metal 3 portrayed Minion as somewhat vulgar (as shown in this info screen) and a simple desire to return to Hell. 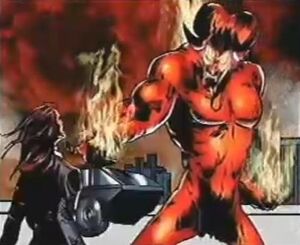 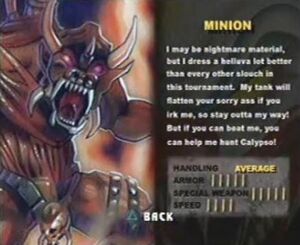 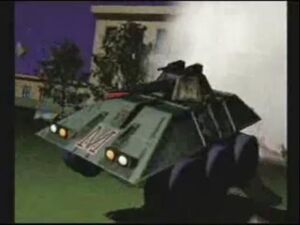 Minion's tank
Add a photo to this gallery

Retrieved from "https://villains.fandom.com/wiki/Minion_(Twisted_Metal)?oldid=3566166"
Community content is available under CC-BY-SA unless otherwise noted.