Serving whoever they believe to be the greatest villain ever

Find and serve the "Most Despicable Masters" in history (ongoing).

Comedic Servants
The Minions are a species in the Despicable Me film franchise, as well as the protagonist villains of a spinoff prequel film of the same name.

The Minions predate Humans by Millions of years. As stated in Minions, their only purpose is to find and serve the most despicable masters in history. In Prehistoric times, they served a T-Rex, whom they accidentally killed, while in Egypt, they served and killed an unnamed Pharaoh by dropping a pyramid on him, killing him (as well as other people). During the French revolution, they killed Napoleon, by shooting him with a cannon. During the 60's, they served Scarlet Overkill, while in modern times, they serve Felonious Gru.

But after Felonius redeems himself and becomes a parent, Minions switch sides and is now currently serving Felonius' villainous twin, Dru Gru.

As their name suggests, the Minions are minions, who seek the most evil people to serve. They have an obsession with Bananas and apples, referred to as 'bapples'. They speak their own language, "Minionese", which is actually a mix of several Earth languages.

The minions are small, yellow, tic-tac-like creatures. For unknown reasons, they wear gray overalls and goggles. Every member of the species has between one and two eyes. 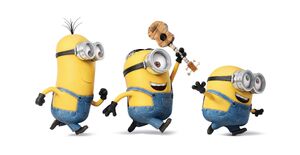