Minitron is a tiny Decepticon Cyber-Tick in Transformers: Robots in Disguise.

Minitron was one of the many Decepticons imprisoned aboard the Alchemor. When the ship crash-landed on Earth by Megatronus, he was freed from his stasis pod. He eventually met up with Steeljaw and joined his gang. Minitron attached himself to Grimlock and took control of him to retrieve the Decepticon prisoners the Autobots captured as part Steeljaw's plan. Minitron used Grimlock to attack the other Autobots and stole the stasis cell containing Underbite.

Grimlock brought Underbite to Steeljaw at the Crown River Dam, but the Autobots managed to catch up with him and Minitron. The Autobots fought Grimlock while Steeljaw escaped with the stasis pod. Grimlock was soon tied down despite having a slight advantage. Fixit and Russell told Autobot about Minitron controlling him, they attempted to find him on Grimlock. Though now realized that Grimlock was possessed by Minitron, the attempt to capture the tick-like Cybertronian criminal proved to be difficult due to his small size and attempted to Bumblebee, Strongarm, and Sideswipe as means to escape. As Minitron attempted to return back to Grimlock in the heat of the difficult fight, the Dinobot managed to catch Minitron and decided to throw Minitron at a wall to incapacitate him rather than squish him. Minitron was placed in a small stasis pod.

Though failed to returned for Steeljaw, he was succeed in freeing Underbite. 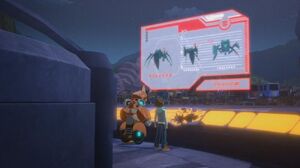 Retrieved from "https://villains.fandom.com/wiki/Minitron?oldid=2833649"
Community content is available under CC-BY-SA unless otherwise noted.