Destroy Earth and the Skrulls for the Kree Empire (failed).

Minn-Erva is the secondary antagonist of the 2019 Marvel film Captain Marvel. She is a Kree soldier who serves as a member of the team Starforce, and also serves for the Supreme Intelligence.

She was portrayed by Gemma Chan, who also played Quintessa in Transformers: The Last Knight and Namaari in Raya and the Last Dragon.

Under the orders of the Supreme Intelligence, Minn-Erva was tasked to help Yon-Rogg and the other members of Starforce to rescue the Kree spy Soh-Larr from the Skrulls (led by Talos). However, they soon found out that that it was a trap to lure Vers into the Skrulls' grasp, as they intend to access her memories, just as Vers manages to free herself before engaging into a fight against several Skrulls. This actions is what caused the Skrulls' ship to self-destruct, forcing Vers, Talos and a number of Skrulls to evacuate to Earth.

Upon receiving a call from Vers over her current location on Earth, Yon-Rogg intends to rescue her so he leads Starforce to a 22-hour hyperjump to Earth, much to Minn-Erva's discomfort. However, Vers soon learned that she was once an Earth pilot named Carol Danvers and that the Skrulls lost their homeworld to the Kree because their refusal to submit to Kree rule and that they just want to find a new homeworld to be safe from the Kree Empire.

Vers also learned that before Mar-Vell died, she created a giant spaceship (powered by the Tesseract) that can be used to harbor Skrull refugees. She also remembered that she witnessed Mar-Vell being killed by Yon-Rogg before she destroyed the engine that erased her memories in the first place. She also remembered that Minn-Erva was there at the event and tried to kill her before being convinced by Yon-Rogg to stand down as he decided to take her in.

Minn-Erva then watches in satisfaction as Vers is being interrogated by the Superior Intelligence, who taunts her of her failure until Vers breaks free of the implant that was used to suppress her powers, allowing herself to free Fury, Maria and the Skrulls from captivity and have them evacuate back to Earth. Upon witnessing this, Yon-Rogg orders Minn-Erva to take down the refugees at once. 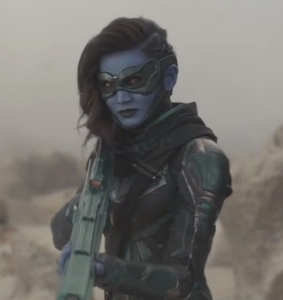