The Adventures of Sharkboy and Lavagirl

Ruler of the universe (formerly)

Command over darkness and evil (formerly)

Wipe out all of dreamland to drown it in darkness and conquer the universe.

Destroy Sharkboy and Lavagirl (both formerly).

Linus, also better known by his supervillain name Minus, is the central antagonist of The Adventures of Sharkboy and Lavagirl. He was Max's arch-rival turned one of his best friends. As Minus, he was Mr. Electric's former boss.

He was portrayed by Jacob Davich.

Minus was a formidable kid, being able to merely point at his intended direction, his minions would immediately follow their overlord. He became a literal dark overlord in planet Droll, wearing all black and purple. He also spoke very arrogantly and condescendingly, "You thought you could escape nightmares by running away to dreamland!?!" but then Max showed him the true value of humanity, and Minus stopped trying to destroy it. He became a close companion of Max afterwards.

Linus had short black hair and wore a red T Shirt and shorts. Minus was "much cooler" wearing a black cape, black and purple leather armour, and had the superhuman ability to hover, and manipulate the Darkness.

His redeemed self was full of knowledge and told Max what he ought to do next, proving Minus was always one step ahead of everyone else.

Linus was a bully and a tormentor of Max's at school, but soon he rose elsewhere in the cosmos to become a formidable dark overlord in command of all things electric.

In The Adventures of Sharkboy and Lavagirl

As Linus, Minus is the main antagonist for the first half of the film. Him and his gang of bullies chase Max through the school, beating him up and stealing his dream journal. In class next day, the teacher Mr Electric makes Minus surrender Max's journal, but Max sees it got vandalised - causing an infamous outburst from Minus: "Mr Electric! Send him to the principal's office, and have him expelled!"

Mr Electric summons both Max and Minus to the principal's office ("With your parents!") and he is suddenly interrupted by a dark storm approaching. Minus is undisturbed by the storm, being more angry when Sharkboy and Lavagirl really do show up. He seems excited about the idea of Max heading off to his possible demise.

Minus returns as the source behind the Darkness consuming planet Droll later in the film. Minus is revealed to be the mastermind behind Mr Electric and the invaders. He also says "I am much cooler... I am Minus!" He then engages in a showdown by saying he'll master Droll's atmosphere and destroy Lavagirl. Max however defends his beliefs by engaging Minus in a battle. Minus causes Max's worst nightmares to come to life; Max gives Minus a brainfart, causing his head to grotesquely swell up.

Minus is not defeated, however - he imprisons him and Max on top of giant towers of rock and tries to sway Max over to evil. But Max's pure spirit wins out and winds up actually turning Minus good. Minus redeems himself under a promise of building a better Universe; and the two reconcile and become friends. Minus promises Sharkboy that he will find his father; and then realises, too late, Mr. Electric is headed for Earth, to destroy it.

Max heads back to Earth and finds the Darkness destroying his school. Mr Electric consumes Max's mom and dad, then hops out to finish Max, but the principal's daughter destroys Mr Electric, saving the Universe.

Linus is now a friend of Max's at school and life returns to normal by allowing dreams to flourish instead of be crushed. 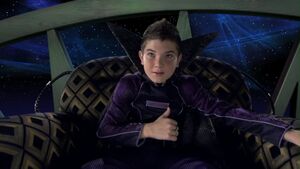 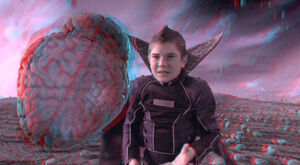 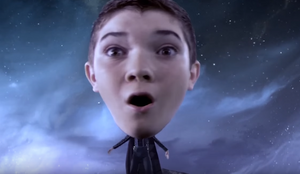 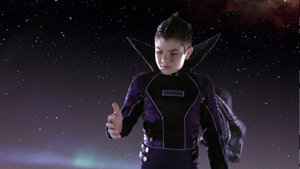