She is formerly the right-hand assistant of Syndrome who assists in his plans to eliminate the world's superhero population before having a change of heart and deciding to help the Incredibles instead.

She was voiced by the late Elizabeth Peña.

Mirage tells Mr. Incredible upon their initial meeting that she is attracted to power like her boss: Syndrome. This statement also gives a subtle explanation of how the two became acquainted.

Unlike Syndrome who is an outright villain that has no regard for human life, Mirage displays traits akin to an anti-villain - she was visibly perturbed when her boss fired a missile at the plane that has children on it; along with the guilt of Mr. Incredible seemingly losing his family; however this did not stop her from aiding Syndrome in his desire to purge Supers.

In the end, she acted on her conscious and effectively defects from Syndrome's faction to aid Mr. Incredible and his family to escape and confront both him and the Omnidroid, ultimately redeeming herself.

Mirage is a slender young woman with white hair and green eyes. She has a tanned complexion and is of ambiguous race.

Mirage and Syndrome lured superheroes to the island of Nomanisan, which is the location of Syndrome's secret base. There, they are finished off by Syndrome's killer robots, the Omnidroids. Syndrome and Mirage were especially focused on luring Mr. Incredible, which they eventually succeeded in doing.

After Syndrome blew up the plane that Elastigirl, Violet, and Dash were on, Mr. Incredible reached from his bondages in anger and was going to grab Syndrome but Mirage pushed him out of the way, and he grabbed her instead. When Mr. Incredible threatened to crush her to death if Syndrome didn't release him, the villain dared him to, not believing that he would actually do so due to being a superhero.

Mr. Incredible released her, and Syndrome declared him weak for not wanting to kill another human being for killing his family. After this, Mirage began to rethink working for Syndrome, and later helped the Incredibles to escape Nomanisan Island to save their city.

In the 4th comic story arc, it is revealed that Mirage now works for the NSA, and has to help a reluctant Helen track down her old nemesis Xerek. When Helen is captured, Mirage saves her by destroying Xerek's robots. 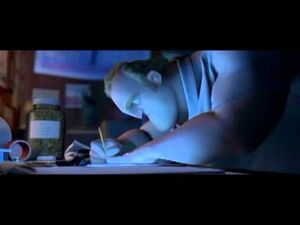 IPad seen on the Incredibles
Mirage's message to Mr. Increcible. 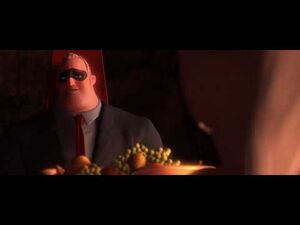 The Incredibles - Mirage Invite To Bob For Dinner 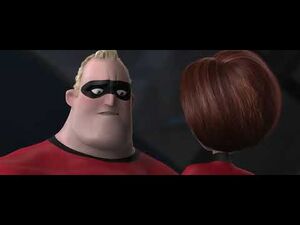