Miranda
The One Who Betrayed 007

Having sex with people and then betraying them.

Assist Graves in his plans.

Miranda Frost is the secondary antagonist in the 2002 film, Die Another Day. Frost was a MI6 agent working for Gustav Graves.

She was portrayed by Rosamund Pike, who also played Amy Elliot-Dunne in Gone Girl and Marla Grayson in I Care a Lot.

Miranda was a Harvard-educated, salubriously luscious, gold medal-winning Olympic fencer (trained by Verity) posing as Graves' publicist and fencing partner. She won gold at the 2000 Sydney Olympics by default, after Graves organized the real gold medalist's death by drug overdose.

While Bond is sent to kill North Korean Colonel Tan-Sun Moon, Miranda secretly sends Bond's true identity to Moon's right hand Tang Lin Zao. This leads to Bond's imprisonment at a North Korean torture camp, where he is brutally interrogated for 14 months before being exchanged for a captive Zao.

Frost was sent by M to work alongside Bond, but does not approve of Bond's methods. When caught by Mr. Kil and several guards, Miranda helps Bond keep incognito by kissing him. They later go to Bond's room and have sex. Unbeknownst to this, Frost empties the magazine of Bond's gun after this.

When Bond awakens and goes after Graves, Miranda pleads for him not to go, but he insists. Later when Bond faces Graves at gunpoint, Miranda arrives as well, also aiming her gun at Graves. However, Graves asks Bond whether he already found out who betrayed him in North Korea, prompting Frost to aim her gun at Bond, revealing that she was the one who betrayed Bond. Bond escapes with the ring that Q gave him by breaking the glass floor beneath them, and Frost and Bond fall into the jungle environment part of the Ice Palace. Frost shoots at Bond while he runs off, but misses and Bond escapes.

When Jinx and Bond enter Grave's plane to kill him, Jinx goes to the cockpit while Bond goes after Graves. However, Jinx is caught by Frost, (who somewhat is only wearing a bra and trousers) who fights Jinx, and she and Jinx have a climactic fight aboard the descending plane. Frost narrowly sliced Jinx in the stomach but Jinx manages to impale a dagger in the chest of Frost, thereby killing her.

Bond was later shown to have mourned Frost; clearly showing, despite her treachery, that he did love her. Jinx convinced him to let her go, because their own lives were in danger. Moneypenny was later seen to have a file on Frost, marked "closed".

Miranda meeting with Bond and Jinx at the party in the Ice Palace. 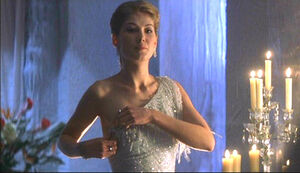 Miranda stripping to make out with Bond. 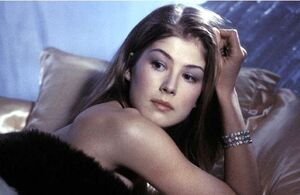 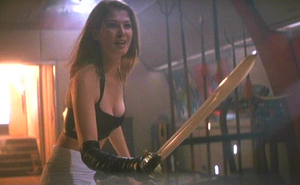 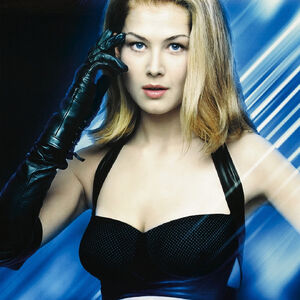 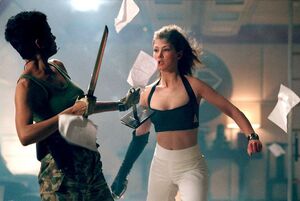 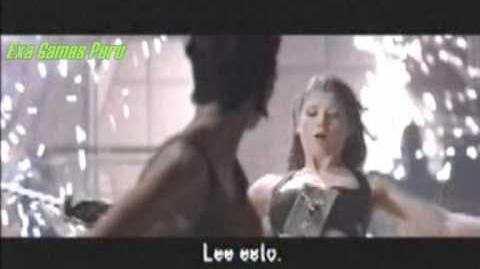