Director of the Gorka Institute
Member of the Ark Society

Sell off a stolen piece of artwork to Blake Nathaniel, just to spite the original artist.

Greedy Businesswoman
Miranda Jamieson, also known as The Appraiser, is an Elusive Target in HITMAN (2018). She was an appraiser who is in charge of the Ark Society's various purchases, and the largest art price fixing ring in the world.

Born in England, Miranda Jamison (née Parker) developed an appreciation for fine arts at an early age. Because of her obvious talents and hard work, she managed to attend Cambridge University from whence she accumulated multiple degrees in business and fine arts history.

From there, Jamison went to work in various high-profile museums and was trained as a junior appraiser at a large American auction house. It was here she met the highly renowned art critic Alistair Jamison, who took her under his wing and trained her as a professional. Despite a substantial age difference, they married when Miranda was 28 and Alistair was 62. Miranda eventually became her husband’s superior and gained a legendary sense for the value of historic objects, earning her the respect of many within the field.

At the age of thirty-six, Miranda lost her husband. At Alistair's funeral, she was approached by her husband colleagues, who explained to her that Alistair had been involved in a complicated price fixing scheme. The group then invited her to take her husband's role and access to the most prestigious art in the most. She eventually agreed and that started her road towards an unscpulous person.

After raising to power, Mrs. Jamison became integral to the whole industry of driving up art prices, selecting just a handful of new talent each year to be the recipients of her blessings. She modernized the price fixing methodology of both galleries and auction houses.

In addition to that, she introduced multiple new practices to keep gallery prices secret and callously dumped a large group of artists, who saw their works turn worthless overnight. This approach to fine art has driven countless normal galleries out of business over the years and resulted in several talented artists committed suicide.

Initially, the critique from some of the bigger collectors panned her decisions. However, the rise in value of the remaining works convinced them that the approach worked from a business point of view. Within five years, Miranda Jamison became not only a member of the art appreciation elite of the world, but also a member of the secretive Ark Society. She now runs the largest art price fixing scheme in the world and is involved in everything from money laundering to tax evasion as a consequence.

Currently, Jamison is looking to expand her reach into the highest of tiers. To achieve that, she has stolen a painting from Randall Pryce, a former client of hers who had offered to sell it to her for $100 million. She considered the price to ridiculous for her to afford. As an act to spite Randall Pryce, Jamison plotted to “gift” the painting to Zoe Washington and Sophia Washington in the name of famed adventurer Blake Nathaniel. She hoped that he will introduce her to his ultra-wealthy contacts.

However, Randall Pryce signed up a contract with ICA and hired Agent 47 to assassinate Jamison during the Ark Society's meetings. The contract also required retrieving Jamison's notebook and must be done before she could sell it to Nathaniel. Jamison was assassinated by Agent 47 at that night. 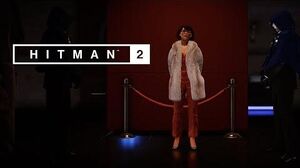