Abusing her subordinates emotionally and physically.

Make Andy continue to be her assistant (failed).

Miranda Priestly is the main antagonist of the 2003 Lauren Weisberger book The Devil Wears Prada, and its 2006 film adaptation of the same name.

She was portrayed by Meryl Streep, who also portrayed The Witch from Into the Woods, Chief Elder in The Giver and Jessica Lovejoy from The Simpsons.

Miriam Princhek was born in the East End of London, on October 25, 1949. Her family members were poor but devout orthodox Jews. Her father was the only working man in the family...

Her mother died during childbirth and after her death, Miriam's grandmother moved in with the family to assist in raising the children. Miriam saved the small bills that her siblings would give her and worked as an assistant to a British designer. She made a name for herself in London's fashion world and studied French at night and was junior editor of the Chic magazine in Paris. When she was twenty-four, Miriam changed her name to Miranda Priestly and replaced her rough accent with a sophisticated one. Miranda spent ten years at French Runway before Elias-Clark transferred her to American Runway. She, her twin daughters, and her husband moved to a penthouse apartment on Fifth Avenue and 76th Street. She is the editor-in-chief of Runway, a very chic and influential fashion magazine published by the Elias-Clark co.

Miranda has twin daughters (from her second of three husbands), Caroline and Cassidy.

Miranda is always accurate, but at the same time always uncertain at what she wants, that causes her marriage and job problems...

Anyway; Miranda's main trait is her (sometimes tyrannical) strictness, which helps her safe her position.

Miranda is tall and slender woman, with white hair and light, pale skin. She always wears clothes from the most expensive brands; including Prada. She is also known for wearing a white Hermès scarf in her everyday outfit.. 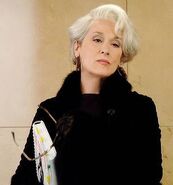 Miranda with Andy and Emily 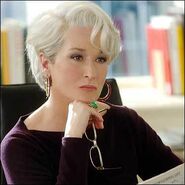 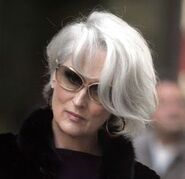 Retrieved from "https://villains.fandom.com/wiki/Miranda_Priestly?oldid=3741010"
Community content is available under CC-BY-SA unless otherwise noted.