Defeat Jolyne and her allies (failed).

Miraschon is a minor antagonist in JoJo's Bizarre Adventure: Stone Ocean. An inmate in Green Dolphin Street Prison and a minion of Enrico Pucci, she is sent after Jolyne Kujo/Cujoh, Ermes Costello, and Foo Fighters in an attempt to both incapacitate them and steal Jotaro's Stand Disc. Miraschon wields the Stand known as Marilyn Manson.

She was voiced by Yui Kondo in Japanese and Suzie Yeung in English.

Prior to the events of JoJo's Bizarre Adventure: Stone Ocean, Miraschon was sentenced to Green Dolphin Street Prison in a five year sentence for committing robbery and assault.

In JoJo's Bizarre Adventure: Stone Ocean, Miraschon is seen for the first time talking to Enrico Pucci, trying to convince him that she has turned over a new leaf and is willing to redeem herself due to her desiring parole. However, this is a likely a empty promise, as Enrico Pucci catches her trying to swipe a cross from him. Although angered with this theft enough to knock her unconscious, the priest takes interest to Misaschon's thieving nature, and as such, Pucci gives the inmate a Stand to try and use her to eliminate his enemies and retrieve Jotaro's Stand Disc.

Going to the courtyard to find the heroes playing catch, Miraschon narrowly avoids a baseball to the back of the head on the eighty-seventh throw and shortly after, challenges them to score one hundred throws for two hundred dollars. Accepting the bet, Miraschon attempts to distract Foo Fighters by being near its prized water, but despite that and a stray basketball, the heroes win the bet and Miraschon originally is forced to pay her debt, but instead, covers herself by proposing a even better challenge, scoring a second set of one hundred throws for a thousand dollars. Ermes accepts this deal, and continues the game with Foo Fighters for the better prize. However, the lack of free time left causes Ermes to require to bribe the guard to only keep the ball, and requiring a way to catch the ball, Ermes uses Kiss to cheat. Detecting this, Marilyn Manson manifests from Ermes' guilt and swipes Ermes' cash, a gold-tipped tooth, and her liver for payment.

Angered by the loss, Jolyne proposes her own bet that if she and Foo Fighters manages to drag the current number to one thousand throws, Marilyn Manson must return what it has stolen, a deal Miraschon accepts. However, through this third round and Jolyne and Foo Fighters returning to the prison to play, Miraschon tries to use the prison around her to stop the two from playing. She first lures them to the showers to switch off the shower lights, but she is rewarded with a shot in the arm for her efforts. Both parties leave the showers, and Miraschon then tricks Jolyne to get inside a fenced service lift, but Foo Fighters manages to toss the ball to Jolyne just in the nick of time, who she later unravels through the bars to get.

A trapped Miraschon is forced to return the liver she stole, but it is revealed that the same guard Ermes bribed was the one also working for Miraschon, who snatches the ball used to bet and heads off. Now cornered, Miraschon tries to finish Jolyne off and steal her father's Stand Disc, but using a string from the baseball, Jolyne uses it to return the item to her and attack Miraschon with it in a ironic beatdown.

Jolyne then takes the original two-hundred dollars from Miraschon, who is left defeated and her Stand Disc now useless due to Pucci wiping her memories of him.

Miraschon is of a height comparable to the heroes, with black eyes and a odd purple hair style that creates a "mask" around her face. Miraschon also wears a sleeveless cyan shirt with "G.D. st. Jail" on the back in red text, white arm wrappings, a blue bracelet on one of her arms, green pants, and brown shoes.

A trickster, Miraschon enjoys to steal from and set bets with others. She also lies often, confident in herself, and is not afraid to use dirty tricks to win her bets.

With Marilyn Manson, Miraschon is able to stand confident knowing that no cheating can be used in her games. Once it detects a loss from the target, Marilyn Manson will appear to demand payment from the target, be it attracting their hard-earned cash or ripping out pieces of their body to sell with its hooks. Marilyn Manson is also invincible to attacked delivered by the losing party, can only be nullified by the Stand User's command, rigs any game so Miraschon is able to cheat to her heart's content, is instantly available to attack if one cheats or tries to attack Miraschon, and is able to read minds so it doesn't steal anything the loser stole themselves. 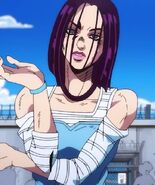 Marilyn Manson being summoned by Ermes losing the second bet.

Marilyn Manson leaving after the third bet is set.

Miraschon about to turn off the shower light switch.

Miraschon being shot in the arm by Foo Fighters.

Miraschon being attacked by Stone Free.