The Chronicles of Narnia: Prince Capsian

King of the Telmar Empire
Tyrant

Kill his nephew Prince Capsian, the Pevensie kids, and Aslan in order to take over Narnia as its new King (failed).

King Miraz, simply known as Miraz, is one of the antagonists in The Chronicles of Narnia series by the late C.S. Lewis. In the books, BBC series and films, he is the main antagonist of Prince Caspian and a posthumous antagonist in The Voyage of the Dawn Treader. He is the blasphemous leader of the Telmarines who plans to take over Narnia as its new king until he was betrayed and killed by Lord Glozelle & Lord Sospespian who planned to usurp the throne and seize control over the Telmar Empire.

Miraz is shown to be extremely blasphemous, authoritative, deceitful, sarcastic and bitter in nature, as he despises the Old Narnians and wants to take over their land to suit his own benefitis.

He is also extremely vituperative and jealous of his brother Caspian IX, as he killed him to take over the Telmarine kingdom and wanted to kill his nephew Caspian X, so that Miraz's newborn son can be the new heir to the Telmarine throne.

Miraz was the brother of the King Caspian IX and the uncle of Caspian X. However, Miraz hated his brother and murdered him so that he himself could become king. Despite this, Miraz decided to let Caspian live because he had no heir, and instead lets Caspian be raised by his old nanny and mentored by a half-dwarf named Cornelius, who secretly told Caspian about Miraz's tyranny.

When Miraz's wife Queen Prunaprismia gave birth to a son, Miraz ordered his soldiers to kill Caspian, but Cornelius warned Caspian, who then escaped. As Caspian takes refuge, he conspired with the Old Narnians and the four Pevensie kids to help overthrow Miraz. However, Miraz caught wind of this plan, and had his Telmarian army to invade against them. As such, the Telmarines manages to take down the Old Narnians twice at Aslan's How. However, as Miraz plans to finalize his invasion by killing the Pevensie kids and Aslan, his treacherous counselors Sospespian and Glozelle plan to betray him and usurp the throne. To that end, they successfully convinced Miraz into a sword duel against the former High King Peter Pevensie.

After the duel, Peter manages to defeat Miraz, but refuses to kill him. Peter gives Caspian his sword to finish Mirax if he wants to, but Caspian refuses to make the blow, not wanting to stoop to Miraz's level. Sospespian took the opportunity to fatally stab with one of Susan's arrows, killing him. With Miraz murdered, Sospespian then took the opportunity to lead the Telmarines to attack the Narnians in revenge for Miraz's death. However, Aslan leads the Narnians to defeat the Telmarines for good, resulting Sospespian's death and Glozelle's disappearance, leaving Miraz's death in vain. 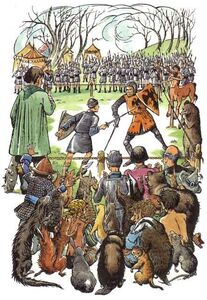 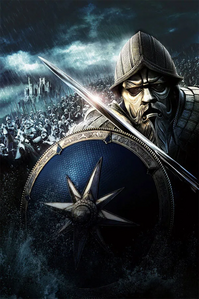 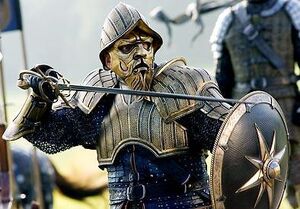 Miraz in battle armor from the movie. 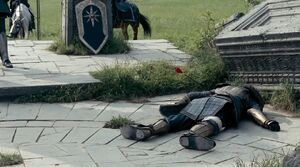