Trick the Queen and Sweetpea Beauty.

The Mirror is the main antagonist from the Veggietales franchise's segment "Sweetpea Beauty".

He was voiced by Mark Steele.

When Sweetpea is back to the castle, the Mirror let her drink the apple cider, then she fainted. The prince carried her to save her. It turned out that she only pretended to faint and the one who drank the poisonous apple cider is one of the Mirror's minions.

The Mirror got Sweetpea and he is about to drop thr from the top of the castle. On the castle, one of the seven snow peas shot an acorn at the Mirror, causing him to fall, break, and perish.

The Queen realized that true beauty is in the inside rather than the outside and she is becoming beautiful again.

The Mirror appeared as a typical royal mirror but he had eyes and mustache. Later, it was revealed that the stand at the bottom are his feet and the handles on his sides are his arms.

The Mirror really wanted everything ruined and this is the reason he lied. He likes tricking people and he also tricked the Queen and she lost her beauty for not accepting herself. 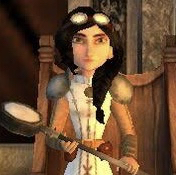