NOTE: This article is about the incarnation of Mirror Master from the Arrowverse. The mainstream version can be found here: Mirror Master.

Ability to manipulate reflecting surfaces, allowing him to enter them, move through them or to trap people inside them

To enjoy the wealth gained through his heists.

To get revenge on Leonard Snart.

He is portrayed by Grey Damon.

Three years prior, Scudder and Dillon teamed up with Leonard Snart for a heist. After the heist was successfully finished, Snart advised the two to lay low for a while and not to throw out the money immediately. However, Scudder did not listen which annoyed Snart. Not happy with Snart's rules, Scudder and Dillon claimed that they wanted out. This promoted Snart to attack, attempting to kill Scudder with his cold gun. Scudder anticipated this move and rushed forwards to disarm Snart. During the struggle, Dillon defeated Snart's henchman but Scudder was knocked down by Scudder. Scudder fell onto a mirror and Snart picked up the gangster's gun, aiming it at Scudder's head. Before he could pull the trigger, however, the particle accelerator at S.T.A.R. Labs exploded, frightening Snart who fled with his men without finishing off Scudder. Scudder and Dillon, who both remained behind in the warehouse, were struck by the dark matter released in the explosion and were both transformed into meta-humans. However, while Dillon remained relatively unharmed, Scudder was drawn into the mirror.

Some time later, while the damages to the warehouse were being repaired, Scudder emerged from the mirror and furiously attacked a shocked worker, interrogating him about Snart.

Scudder enters the nightclub owned by one of the thugs who were with Snart during the fight. Entering the club through various reflecting surfaces, Scudder eventually appears inside the room. He asks the man where Snart is, which the man cannot answer. As revenge, Scudder throws the man into a mirror and expels him out of a window, causing the man to fall to the ground from the second floor. The injured man heads to the GCPD, warning detective Joe West about Scudder.

Scudder later busts Dillon out of Iron Heights, appearing in her cell by morphing in through a window and escaping through the very same one. Back in their hideout, Scudder proposes that the two of them take over the city as no one would be able to oppose them. Dillon tells him about the existence of the Flash.

The two start robbing banks again, with Rosa disposing of all guards by using her powers to throw them into a vertigo-high. While the hallucinating guards are lying on the ground, Scudder and Rosa are about to escape. However, they are confronted by the Flash and his sidekick Jessie Quick. Scudder is surprised, claiming that he heard much about Barry. The two then enter a nearby window and make their escape but Barry and Jessie follow the reflection, knowing that the two are forced to leave the reflection eventually. The two speedsters pursue Scudder and Dillon over the glass window panes of Central City's skyscrapers. The two eventually separate, while Barry pursues the reflection of Scudder, Jessie confronts Dillon. When Dillon uses her powers to drug Jessie, causing her to fall of a rooftop, Barry is forced to cease his pursuit of Scudder to catch his fallen friend. Back on the ground, Barry is surprised by Scudder who grabs him, shoves him into a glass wall and traps him inside. Before escaping, he wishes Jessie good luck getting Barry out of the window. Barry is later freed when Caitlyn Snow uses her newfound frost-powers.

Scudder and Top are later seemingly called by Leonard Snart, who arranges a meeting in a hall of mirrors of a nearby amusement park. However, when battle ensues it is revealed that Snart was merely a hologram. Jessie and Barry reveal themselves. While Top tries to use her powers on Jessie again, Jessie overcomes the effects and knocks out Dillon easily. Meanwhile, Barry builds a makeshift arena by surrounding himself and Scudder with a wall of mirrors. Scudder is amused as he thinks Barry has given him an advantage. However, as the mirrors are reflecting each other, Scudder is caught in an infinite reflective loop and can thus not coordinate his attacks. This allows Barry to take him down and to surrender him to the police. Scudder is brought to Iron Heights where he is trapped in a special cell covered with an antireflective material.

When Barry runs off into the future, to 2024, in order to learn the identity of Savitar, he finds that Mirror Master and Top are still a major criminal force in Central City. The moment Barry arrives in the future, he is found by Top and Mirror Master. Top uses her powers to disorientate him, causing him to stumble around. Mirror Master then emerges from a glass panel and punches Barry to the ground. While Barry is still on the ground, Mirror Master starts kicking Barry, claiming that Central City belongs to him. However, Barry swiftly regains control, knocks both villains to the ground and speeds off, having more important things to take care of.

During his time in the future, Barry brings the formerly disbanded Team Flash back together. When Mirror Master and Top commit a robbery in a jewelry store, they are confronted by Barry. The two are annoyed, claiming that they warned Barry to stay away from them. Top uses her powers on Barry once more, disorienting him, and Mirror Master uses his powers as well to further add to Barry's confusion. However, Barry is aided by the Barry from 2024 who uses a device which counter-acts the villains' powers. Realizing this, the two run off and split up. Mirror Master tries to flee into a glass panel but the future Barry simply follows him, beats him up and throws him out of the glass again. Mirror Master and Top are then arrested and imprisoned once more. 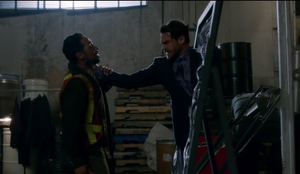 Scudder emerges from the mirror 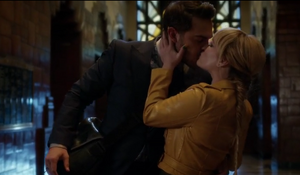 Scudder and Top kiss after a successful heist 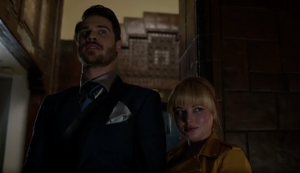 Scudder and Top are confronted by Barry and Jessie 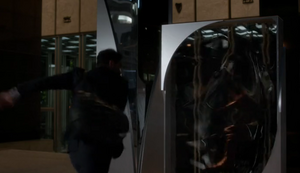 Scudder traps Barry inside a mirror 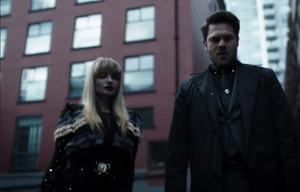