The Wicked Queen
The Queen

Be young and beautiful forever.

Be the fairest of them all.

The Mirror Queen was the "wicked witch" of The Brothers Grimm and one of the film's two main antagonists (the other being General Vavarin Delatombe). She was likely a retelling of one of the Grimm fairytale characters (notably the Wicked Queen) - this was more than intentional, however, as the concept of the movie was that fairy tales were based on reality.

She was portrayed by Monica Bellucci, who also played Kaileena in Prince of Persia series.

500 years ago, she was a Thuringian queen who was treasured by all of Europe, famed for her incredible beauty, but she was also vain and selfish. Her world was her own reflection. Long ago, King Childeric I came to the forest to build a city while the queen experimented with black magic to gain eternal life.

A plague swept through the land and she hid in her tower, while her husband and everyone below her perished. Her spell granted her immortal life but not the youth and beauty to go along with it. Her youthful appearance now only exists in her mirror, the source of her life, as an illusion and nothing more. She needs to drink the blood of twelve young girls to regain her beauty; ten have already been reported missing. The queen is working an enchantment to regain her beauty with the aid of her werewolf huntsman and his magic axe, crow familiars, and various creatures in the forest small village of Marbaden.

On a harsh winter night, Angelica's father, the hunter, had been attacked by wolves and nearly died, until he was saved by the queen, who put a spell on him to make him his servant, with him gaining the power to transform into a wolf and was given an enchanted axe.

To get the twelve girls she needed for her ritual, the queen used creepy and macabre methods:

When the last child is recovered, the queen of the mirror took the daughter of the hunter Angelica, as the twelfth substitute, leading the father to deliver his own daughter.

After getting the 12 girls, a blood moon begins to happen and the queen begins her ritual with the help of the hunter.

Jacob climbs the tower, while Will battles Delatombe. He throws the hunter's ax at the elderly queen, who is pushed back towards him. Then he picks up one of the daggers on a table and the queen spells the dagger, causing him to lose control over it. Escaping and defeating Delatombe, Will climbs the tower and picks up the other dagger that was on the table, despite his brother's warnings not to take it. The queen takes control of both in a sword fight, which would only end if one of the two let the dagger be driven into the other's chest. Jacob releases his dagger, driving it into Will's chest, while the queen's enchantment is complete and she regains her youth. The queen then snatches the bewitched dagger from the hunter's heart that gave it vital force and places it on Will in the wound of the knife.

However, this proves her downfall. Now that the huntsman is no longer under her control, he tackles the queen towards the outside as they both plummet to the death when the Queen's mirror shatters.

The Queen is based on two Classic fairy tale characters; The Evil Queen from Snow White and the witch Dame Gothel Rapunzel. She was initially a very beautiful woman, with pale skin, brown eyes, and raven colored hair that is long enough to reach the ground from her tower window. But after being locked away in a tower at the ruins of her old castle for 500 years, her young, gorgeous exterior becomes old and haggardly.

She wears a red and gold dress with a white Collar with a deep, v-shaped cleavage and long sleeves that drag on the floor like a wedding train. Sometimes, she wears a golden tiara encrusted with rubies and pearls, and occasionally wears a giant golden headdress with a crown in the center. In the final act, she wears a crown with antlers and her own hair wrapped around it. 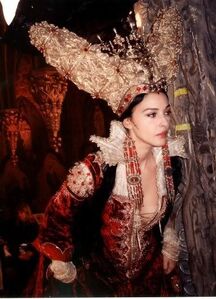 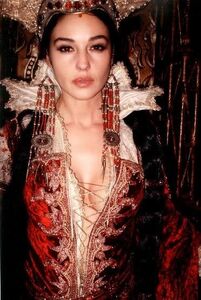 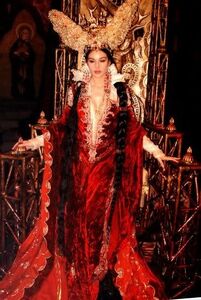 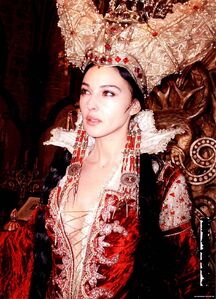 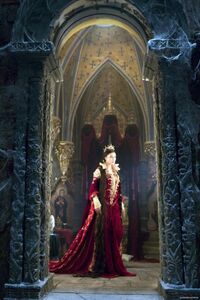 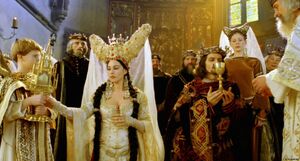 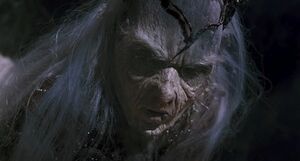 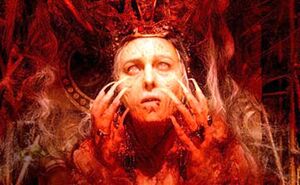 The queen during the rejuvenation ritual. 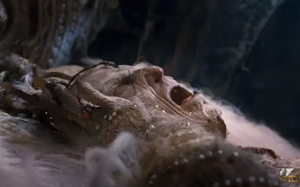 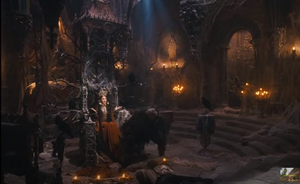 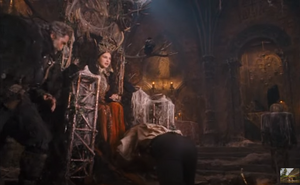 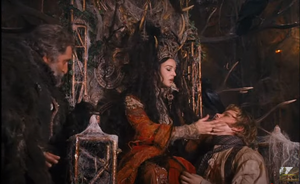 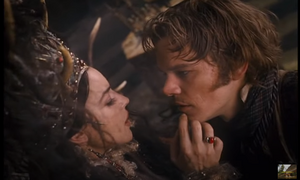 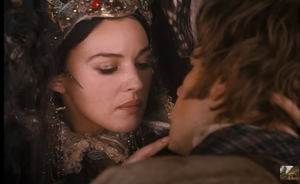 Add a photo to this gallery
Retrieved from "https://villains.fandom.com/wiki/Mirror_Queen?oldid=4159822"
Community content is available under CC-BY-SA unless otherwise noted.