To be young and beautiful forever, to be the fairest of them all.

The Mirror Queen was the "wicked witch" of The Brothers Grimm and the movie's primary antagonist, she was likely a retelling of one of the Grimm fairy tale characters (notably the Wicked Queen) - this was more than intentional however as the concept of the movie was that fairy tales were based on reality.

She was portrayed by Monica Bellucci.

500 years ago, she was a Thuringian queen who was treasured by all of Europe, famed for her incredible beauty, but she was also vain and selfish. Her world was her own reflection. Long ago, King Childeric I came to the forest to build a city while the queen experimented with black magic to gain eternal life.

A plague swept through the land and she hid in her tower, while her husband and everyone below her perished. Her spell granted her immortal life, but not the youth and beauty to go along with it. Her youthful appearance now only exists in her mirror, the source of her life, as an illusion and nothing more. She needs to drink the blood of twelve young girls to regain her beauty; ten have already been reported missing. The queen is working an enchantment to regain her beauty with the aid of her werewolf huntsman and his magic axe, crow familiars, and various creatures in the forest small village of Marbaden It was on the Queen's wedding day that the Black Plague happened.

The King was the first to die. His bride built a tower. She locked herself away, safe from the horrors below. But what she forgot, was that plague is carried on the winds. When she first fell sick, and her gorgeous flesh began to rot away, they say you could hear her screams across the oceans. 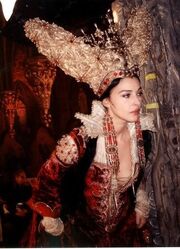 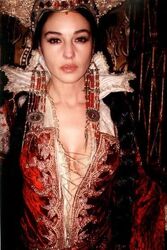 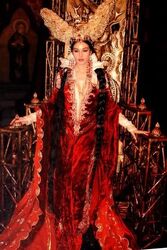 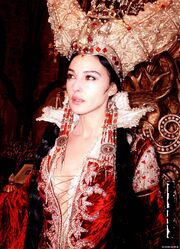 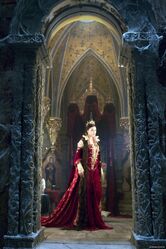 Add a photo to this gallery
Retrieved from "https://villains.fandom.com/wiki/Mirror_Queen?oldid=1468411"
Community content is available under CC-BY-SA unless otherwise noted.
StarWarsTrivia Ad:TrekHistory GalaxyQuest