Leader of the Brotherhood of Makuta (formerly)

Leading the Brotherhood of Makuta.

Seek revenge on Makuta Teridax for his treachery.

Krika saved him from being executed and was then imprisoned in the island of Artidax where he waited for his chance for revenge against Teridax.

Later, he was freed by the Order of Mata Nui and allied with them and the Toa Hagah to seek revenge on Teridax.

Prior of the start of the series, Miserix and the other Makuta were created by the Great Spirit with the use of the Antidermis over 100, 000 years ago on an island in one of the southern chains of the Matoran Universe. Soon after that, Miserix have founded the island named Destral and eventually formed the Brotherhood of Makuta and was appointed as their leader as the Brotherhood's goal was to maintaining the order of the universe.

Following the completion of the fortress in Destral, Miserix appointed Teridax as his trusted lieutenant. Aside his duty as the leader, he was also responsible for creating various Rahi breeds to populate the universe.

When Mutran returned with the knowledge of how the universe worked he had gained from the being named Tren Krom, Teridax immediately demand the Convocation on Destral, something that no Makuta other than Miserix would do and had not asked his permission to do so. When Miserix heard of what happened and fearing that Teridax will take over the Brotherhood, he demanded Teridax to surrender, dismissing his "Plan" to overthrow Mata Nui as treason. Teridax attacked Miserix, claiming leadership of the Brotherhood as the other Makuta joined his rebellion.

Miserix was sentenced to death, only the Makuta who were supposed to carry out the execution imprisoned Miserix on the Isle of Artidax, an island far to the south of the Matoran Universe, where he was guarded by Rahi and other powerful beings. The chains shackled to Miserix weakened him, so he spent thousands of years absorbing some of the surrounding Rahi into his armor until he grew into a large dragon-like beast.

A few millenia later, the Order of Mata Nui sent a team led by Brutaka to Artidax to track Miserix down, hoping to use his power in fighting the Brotherhood.

Brutaka and his team then tried to reason with Miserix, attempting to win him over to their side. Miserix spotted Spiriah, a rogue Makuta who was part of the team, and asked him to come forward. He promptly killed Spiriah by absorbing him into his body, as a reprisal for his betrayal. Brutaka's team then proceeded to free Miserix, breaking the chains that held him. Miserix then grew wings and fled, taking the remainder of Brutaka's team. Before leaving, he turned to the island that had imprisoned him and vowed to destroy it someday.

Miserix then traveled through the Matoran Universe, assisting his allies while seeking vengeance on Teridax.

Miserix is the last surviving member of the Makuta species at the end of the Bionicle series.

Miserix could be extremely quick to anger and ill-tempered. He is extremely intelligent, and very cautious. During his imprisonment, he knew that the other Makuta had shunned their inner light, and proceeded to do so, thinking that he would not allow them to have an advantage over him. His hatred of Teridax is great enough to have him allying with the Toa and Matoran to destroy Teridax.

Like other Makuta, Miserix possesses powerful Shadow elemental powers, and the 42 Kraata powers. He is a powerful Makuta that is feared by even other Makuta in the brotherhood.

Miserix wielded the Great Mask of Mutation, thus allowing him to cause mutation on any being or creature it is directed at, and that mutation can only be reversed by him. His weapons mainly involved his powerful firestaff as well as his bladed claws and tail. He has a penchant for shapeshifting into fearsome reptilian forms. 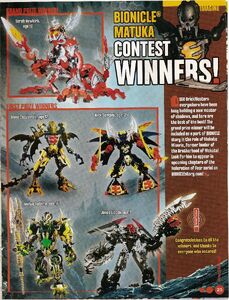 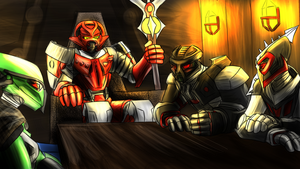 Miserix during his times as the leader of the Brotherhood of Makuta.
Polski
Community content is available under CC-BY-SA unless otherwise noted.
Advertisement