Miss Cheevus is a villainess in the 1996 comedy film Spy Hard.

She was portrayed by Marcia Gay Harden.

The flirty Secretary for the spy agency director first gets introduced when the main character, Dick Steele comes into the office for a lustful exchange of words and innuendos. Comically as they're leaving the office Miss Cheevus is seductively laying across the table in hot red lingerie only to get little but no attention. After briefly being shown eavesdropping on a phone conversation on Dicks current status she is revealed to be a traitor, now by the side of the evil general. However this is short lived when informed that she's failed him due to the main protagonists still being alive. Her face drops in horror and pleas as she gets dragged away and thrown in the cage with the rest of the captives.

Dick manages to break free and release everyone from the cage for the final show down and Miss Cheevus helps the protagonists in final fight to redeem herself. As she helps untie Dick he lets her know he forgives her for being under the influence of an evil man, she lightens up a smirk only to be then be remarked that it was still a lousy thing to do, leaving her with a confused look. 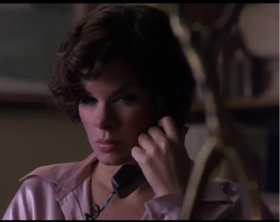