Miss Endive
Mama (by herself)

Teaching her apprentice Panini
Hanging around her pool

Miss Endive is a major and tragic character of the 2008 Cartoon Network series Chowder. She is the overall main antagonist of the series, despite being an anti-hero in a few of the show's episodes.

She was voiced by Mindy Sterling, who is best known for her role as Frau Farbissina in the Austin Powers franchise and Miss Briggs on iCarly.

Endive is a popular chef in the city of Marzipan. She is the rival of Mung Daal, as she considers herself much better of a chef then he is. Her apprentice is Panini, who she uses to her advantage due to Panini's huge crush on Chowder, Mung's apprentice. She is rather self-centered, and has a seething hatred towards men because her fiance never came to her wedding. Despite this, she is shown to have a crush on Mung's employee, Shnitzel, and even forces him to marry her. She also has an explosive temper that makes her feared by almost everyone in the city of Marzipan. Although she is shown to be somewhat evil, she does have a conscience. This is shown when she started panicking when she thought she had crushed Mung and Chowder when she locked them in a room and forced them to peel her stack of Grow-tatoes in the episode "At Your Service." She also starts panicking when she thought she had crushed Mung when she tried to prank him by squashing him with a pie outside the motel he was staying in the episode "The Prank."

She tends to be very bossy and rude, even to her apprentice Panini and helper Marjorine. She tends to use the needs of other people to manipulate them to her advantage, such as in "At Your Service", when she beat Chowder and Mung to Gazpacho's fruit stand and purchased the Mood Fruits that they wanted, so in order to get the Mood Fruits, rather than admitting that Endive was the better chef, Mung and Chowder are forced into servitude towards Endive so she won't smash the fruits that Mung needs to complete his recipe. In the end of the series, Endive and Schnitzel get married and Schnitzel finds that he enjoys company with Endive and that he does, in fact, love her. However, she has a quite obvious dark side, which is apparent in the episode "Schnitzel Quits", when Schnitzel, when hiding from a rampaging Endive, discovers a skeleton that Endive kept in her closet, begging for help.

In "Endive's Dirty Secret", when Chowder, Mung, and Schnitzel begged to use her pool due to them suffering in the sun, Endive refused and heartlessly set her dog security guards on them. However, hiding from the dogs in a tree, the three managed to get pictures of Endive's dirty secret - unlike everyone in Marzipan City, who ate their toe jam with a spoon, Endive ate hers with a fork. In "The Fire Breather," she has been confirmed as the "coldest person in Marzipan City." She also thinks highly about her apprentice Panini (who has a huge crush on Chowder who initially did not return Panini's feelings and Chowder aka "Num-Nums" would always respond to Panini's attempts to seduce him with the famous quote, "I'm not your boyfriend!") and looks down on other apprentices, like Chowder (whom Endive calls "the purple one") and Gorgonzola.

Endive is shown to be a very obese woman who is highly exaggerated throughout the series. She is often seen wearing a red dress. She has orange skin, green hair, and a long nose (longer then Mung Daal's). Despite her regal appearance, she doesn't wear shoes. Her size is large, though inconsistent throughout the series. Sometimes she's only slightly taller than Mung and other times she's depicted as being the size of a house. 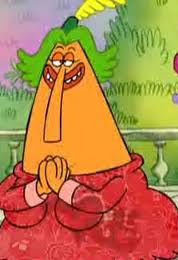 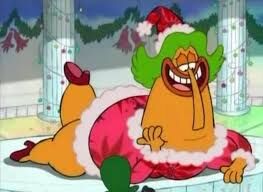 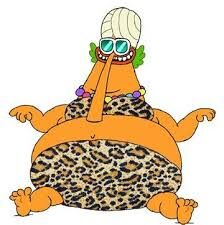 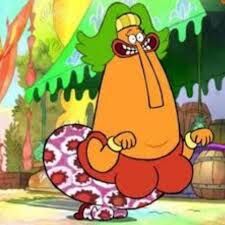 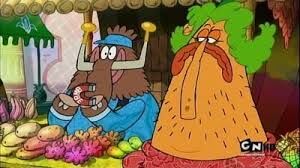 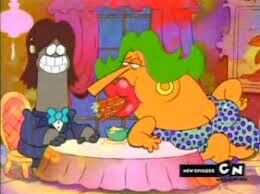 Though she is depicted as just a typical business rival, she has done actions that are considered villainous or downright evil.

Retrieved from "https://villains.fandom.com/wiki/Miss_Endive?oldid=4110725"
Community content is available under CC-BY-SA unless otherwise noted.