Femme Fatale (in Tapped Out)

Defending her boss' base.

Oppressive Martial Artist
Ms. Goodthighs is the secondary antagonist in The Simpsons episode "You Only Move Twice". She works at Globex, a technology company owned by her boss, the infamous supervillain Hank Scorpio.

She was voiced by Tress MacNeille who also voices other characters in the series.

Miss Goodthighs first appeared in a car trying to offer Waylon Smithers a job at Globex, but he declines, so she offers the role to Homer Simpson instead. As such, Homer talks this over with his family, who all agreed that the new job might help with more money. The Simpsons moved over to Cypress Creek, where Homer (despite his ineptitude as a nuclear inspector) does an excellent job motivating Globex's nuclear division (even offering hammocks to the employees to reducing overtime working), resulting a 2% increase in productivity. As such, Homer's skills impressed Scorpio and Goodthighs as well as the rest of the Simpson family, who are very proud of Homer. Later in the episode, Goodthighs informed Scorpio that there is a conference call with the United Nations waiting for him, a call in which Scorpio reveals that he and his forces (including Goodthighs and the other Globex employees) are threatening the United Nations with their doomsday device as part of Scorpio's true plan to conquer the East Coast.

Despite enjoying his new job working alongside Scorpio and Goodthighs at Globex, Homer is upset to hear that his family are very miserable living in Cypress Creek and want to return to Springfield (as Marge mopes to herself since the house is capable of cleaning itself, Lisa is allergic to all the wildlife around Cypress Creek, and Bart is forced to take a remedial class due to his lack of cursive writing). Following the execution of a British agent named Mr. Bont (thanks to Homer managing to foil the agent's escape by wrestling him down), the U.S military have invaded Globex with the intention of stopping Globex. Wearing a bikini and high heels, Goodthighs aids Scorpio and his men in fighting the military, using her strong legs to easily crush an army soldier's neck. She is not seen again after that and her fate is unknown, though it would've appeared that she has managed to help Scorpio and his forces accomplish their goal in taking over the East Coast, as a newspaper article detailed Scorpio's success while the Simpsons moved back to Springfield (thanks to Scorpio's advice to Homer on doing what's best for his family). 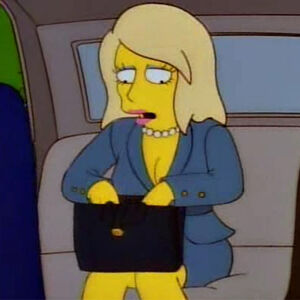