Villains Wiki
Register
Don't have an account?
Sign In
Advertisement
in: Greedy, Redeemed, In Love,
and 35 more

To find true love (both failed).

Miss Agatha "Aggie" Hannigan is the main antagonist of the Broadway musical Annie and its 1982 and 1999 film adaptation, while she is a minor character in its 1995 sequel.

The alcoholic caretaker of the orphanage in New York City, she despises children, particularly girls, but nonetheless loves her job. Her cohorts are her brother and his girlfriend Rooster and Lily St. Regis (the former of which is in jail for unknown reasons prior to the events of the films).

In both film adaptations, Miss Hannigan wakes up the orphan girls and makes them scrub the floor until it shines "like the top of the Chrysler building". (In the 1982 version, she does it after hearing Annie sing to Molly, but in the 1999 film version, it was after she catches Annie trying to sneak out to find her parents.)

(According to the 1982 film, if it didn't happen, their backsides would). The same day, Annie (the protagonist) hides in the laundry basket (which Mr. Bundles takes away). As Annie is brought home by a cop that Miss Hannigan sends (along with a stray dog named Sandy), the latter (Miss Hannigan) threatens to send Sandy to the sausage factory.

Because of this, Grace Farrell (the board of the orphans and secretary of Oliver Warbucks), who decides to take Annie to Mr. Warbucks' house for a visit, takes Sandy with her. While Annie is gone, Rooster and Lily escape from jail and pay her a visit. They intend to use the situation that Annie is at a billionaire's house for wealth, but without knowledge.

In the 1982 film version, Miss Hannigan goes with her helpers (who are taking Annie away), and suddenly changes when Rooster is about to catch and kill Annie (who has escaped onto the drawn B&O Bridge) because they didn't tell her that they were planning to kill her and is knocked down for trying to stop him. When Rooster slides back down (due to Punjab knocking him after catching Annie), Miss Hannigan scolds him and beats him with her purse calling him a "reprobate." Rooster and Lily are then arrested. Later, she, now a good woman, and is among the guests at a party where FDR and the First Lady are enjoying themselves.

Miss Hannigan is only a secondary character and may not really be villainous. She appears when Molly is first talking to Annie while the latter is delivering papers (and a small homemade pie to her), looking for the former. Later, she’s shown again when Annie and her friend Hannah knock on her door.

Annie claims she and Hannah had all the fun doing the chores she had them do, and ask to repay her by taking part of her burden off her hands for a whole week. Since Miss Hannigan doesn't get it, Annie offers to take Molly with them on their trip to London, giving her "one less little brat to worry about for seven days." Miss Hannigan refuses the idea, causing Hannah to point out that she (Miss Hannigan) is meaner than she (Hannah) can remember.

There, Miss Hannigan appears again, yelling for the ship (known as the Queen Mary) to be stopped because Annie and Hannah had stowed Molly away on the ship. Nobody listens, and she’s never seen or heard from again, but spoken of.

In the 1999 Disney film version, after Miss Hannigan and her brother (pretending to be Annie's parents, the "Mudges") try to get her, and the orphans reveal who she really is (after blackmailing Lily into revealing what would happen to Annie right after accidentally revealing the secret), she and her helpers are arrested by Franklin Delano Roosevelt's Secret Service upon their arrival. On Miss Hannigan's part after failing to get Annie to vouch for her, she goes insane like she said she would and is taken away on a hand truck to an asylum.

Miss Hannigan appears in the 2014 film adaptation as the secondary antagonist turned anti-heroine (the main antagonist being Guy Danlily, although she appeared to be the main villain at first). She’s the love interest of a cashier named Lou, but she doesn't have a crush on him and rejects anything of his. Unlike in any other version, Miss Hannigan runs a foster home in Harlem.

When Miss Hannigan wakes up the girls and squirts them with a spray bottle, she demands they clean up the foster home like their lives depend on it, and make sure that it includes the bathroom, but not to touch her medicine cabinet... oh, and no singing or dancing. When they come, she tells the girls to look well-cared-for (though she tells Annie to pray) by doing something, like reading or putting a puzzle of a kitty-cat together.

Eventually, Guy did a fake DNA test to make it look like a particular couple really is Annie's parents and he betrays Hannigan by cutting her out of the deal. Upon learning of Guy's betrayal, Hannigan quits on him and reforms, especially when Lou points out that there’s a gold-hearted woman inside her, and when Stacks mentions that Annie has been bragging on how wonderful Hannigan's singing voice is. She ends up feeling really guilty over her part of the plan to have Annie's "real parents" come to take her away, and enlists the girls to get her to Stacks so she can confess.

She reveals Guy's plan and betrayal to Stacks and Grace. Enraged, Stacks fires Guy and Grace punch him in the face before taking part in the chase. Hannigan is last seen dancing with the others during the credits. 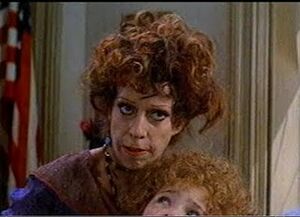 Carol Burnett as Miss Hannigan in the 1982 film.