F. Pauling, or better known as simply Miss Pauling, is a character from the 2007 Valve video game Team Fortress 2. She is the Administrator's loyal assistant, who helps and hires the mercenaries, as well as takes care of tasks such as ordering supplies, running communications, disposing of witnesses, and doing background checks.

She is voiced by Ashly Burch.

For the WAR! Update, Pauling was tasked by the Administrator to split up the RED Demoman and BLU Soldier's friendship, as inter-company friendships are forbidden by contract. She offers both parties weapons in exchange for killing the other, starting a seven-day war that ended the two's friendship.

In the comic Meet the director, Pauling hires a Director to interview the mercenaries and record their responses regarding their jobs. Afterwards, Pauling lures the Director to a mine with a loaded gun shovel and bag, and the Director is never seen again.

In the A Smissmas Story comic, Pauling tries to get Spy to assist in killing Old Nick.

In the comic Loose Canon, it is revealed that Pauling killed the monkey Poopy Joe by launching him into space, which she did for a dollar.

After the deaths of Redmond and Blutarch Mann, the mercenaries lose their jobs. However, when Gray Mann's Machines attack, Pauling encourages the mercs to return to battle the robots and make money again. Pauling and Soldier infiltrate Gray Mann's base and and steal intelligence. She is later instructed by the Administrator to regroup all of the mercenaries, which she does by impersonating a police officer to recruit Soldier, burning down the Pyro's company, hiring Demoman, saving Spy and Scout from being hung for terrorism, and picking up Heavy. With the Pyro's help, she destroys documents regarding the Administrator's past before going to get the Sniper. The Administrator then tasks her with collecting the last of a rare metal called Australium. However, when Miss Pauling arrives, she finds it destroyed.

Pauling and the mercs are captured by the Team Fortress Classic Mercenaries, who begin to torture them for information. Despaired that she failed her mission, Pauling attempts suicide, but is saved by Soldier. Pauling confronts a dying Gray Mann about her loyalty to the Administrator and explains how she has lied and killed in her service, but Gray dies in the middle of her speech. She and the mercs try to escape, but are captured by the TFC mercenaries' Leech Bots, which begin to drain her blood. She begins to hallucinate as she dies, but is saved by the Medic. Aided by Scout, Pauling fights off the Machines. She then gets a call informing her that the Administrator has died. Discouraged, Pauling finishes off the robots and makes a speech to the dying TFC Heavy. The Administrator is brought back to life, and Pauling and all the mercenaries get their jobs back.

In the animated short "Expiration Date", which promoted the Love and War Update, Pauling contacts RED Team explaining that they left witnesses at their last job. She shoots them and begins to hack them up with an axe, all while Scout tries to find the courage to ask her out. After a misunderstanding where they believe that the Engineer's teleporters have given them all tumors and three days to live, Scout asks Spy to instruct him how to impress women, as his last wish is to go on a date with Miss Pauling. He sounds the briefcase theft alarm to bring Pauling down to the base, though Pauling is upset that he wasted her one day off a year. She attempts to leave, but the base is attacked by a Giant Bread Monster accidentally created by Soldier. Scout and Pauling work together to rig a bomb to destroy the monster, but end up on the wrong side of the blast doors. The two dive into the monster's mouth before the bomb explodes, killing the monster. Pauling agrees to allow Scout to go on tasks with her, such as sanding off fingerprints of corpses, pulling out teeth, and killing someone who pressed a briefcase alarm. She then realizes that Scout is the one who pressed the alarm, and says that he'll already be there for that one. 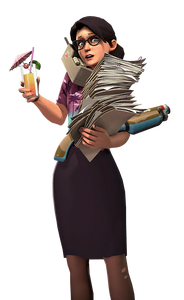 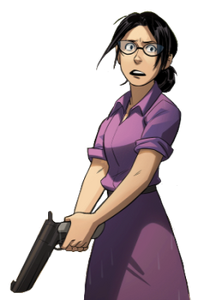 Miss Pauling in the comics. 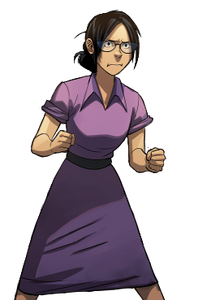 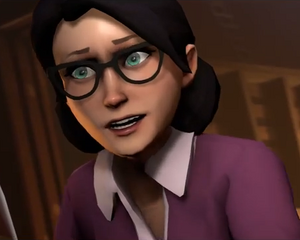 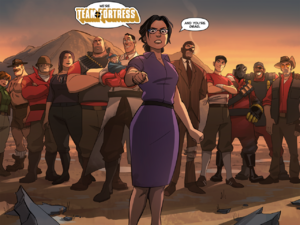 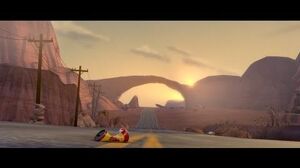 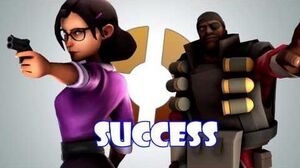 Miss Pauling Voice Lines
Add a photo to this gallery

Retrieved from "https://villains.fandom.com/wiki/Miss_Pauling?oldid=4346336"
Community content is available under CC-BY-SA unless otherwise noted.