Miss Scorpion is a deluded woman who is the leader of the "Thug Hunters" (the "Thug Hunters" appear as a vigilante organization, searching for criminals and gang members to take to "Con Island" where they are forced to battle the toughest of the Thug Hunters).

Ms. Scorpion is a highly skilled fighter and is an expert with blades. She also has the ability to recover from injuries (especially broken bones). It is discovered that all along she had been possessed by Panther Zora, and she transforms into a Scorpion beast.

Akira, one of the Bully Alumni is seen fighting Ms. Scorpion. After defeating all of her minions, he is offered to have his life spared if he will become one of her soldiers, however, he is completely unwilling to surrender his soul. Meanwhile, the Thug Alliance is discussing the disappearance of the eight Bully Alumni.

The Thug Hunters invade the meeting and take Daiko hostage. Honey and the gang set out to rescue Daiko from Con Island. In order to reach the island, the group has to travel by boat. Honey separates from the rest of the group, leaving Chokei in charge of the rescue mission. Chokei, Danbei, Akakabu, and Natsuko enter the prison, and are shortly reunited with Daiko. Ms. Scorpion arrives and challenges the group to fight with her Thug Hunters.

Anyone who beats her gang will be offered one of two choices: death or joining the gang. Meanwhile, Honey arrives in guise of a male prisoner who is attempting an escape. She sets herself up to be captured by some guards in order to get into the compound. Once inside, she sees Akira, who has been chained to the wall because he refused to join Ms. Scorpion's gang. Honey is chained to the wall and whipped for attempting to escape.

Meanwhile, Akakabu is selected for combat. He survives the battle thanks to his ability to tolerate infinite pain. When she sees her husband being attacked by 2 Thug Hunters at once, Daiko becomes very angry and steps into the ring. Danbei tries to help but is stopped by Ms. Scorpion. Meanwhile, in the dungeon, Honey realizes that if her uniform is ripped any further, her femininity will be revealed. She reverts to her original form and takes out the Thug Hunters.

She then frees Akira, who helps her to release the other prisoners. After freeing the prisoners, Honey goes to help her friends. She disguises herself as a masked wrestler named "Riger Mask". As Daiko is being strangled by one of the Thug Hunters, Honey enters the ring and destroys the three Thug Hunters. She chooses her next opponent to be Ms. Scorpion. Honey loses her mask, revealing that she is a woman which shocks Ms. Scorpion.

As Honey transforms into her warrior form, Panther Zora takes over Ms. Scorpion, turning her into a nasty monster. As Honey battles Ms. Scorpion, Akira battles with the remaining thug hunters to rescue Chokei from an electric shock machine. He then announces that he has set a bomb and that all prisoners should evacuate. Chokei is untied and all prisoners run for the exit door. As Honey destroys Ms. Scorpion, Akira's bomb goes off. As the crowd wonders if Honey was killed, she is seen helping Akira from the wreckage. 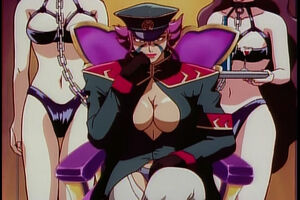 Add a photo to this gallery
Retrieved from "https://villains.fandom.com/wiki/Miss_Scorpion?oldid=3419724"
Community content is available under CC-BY-SA unless otherwise noted.