Spying Femme Fatale
Miss Taro is the secondary antagonist in the 1958 James Bond novel Dr. No and a supporting antagonist in its 1962 film adaptation. She is a henchman of Dr. Julius No and secretary for Mr. Pleydell Smith.

She was portrayed by the late Zena Marshall.

Miss Taro is the secretary for Mr. Pleydell Smith in Kingston Jamaica. However, in secret, she is a henchman for SPECTRE agent known as Dr. Julius No.

When Bond comes to visit Mr. Smith, Miss Taro eavesdrops on their conversation from the other room. Bond catches her spying and she claims she was searching for the files on Dr. No.

Later, Miss Taro invites him up to her home. In reality, she is trying to lure him into an ambush. En route, the assassins attempt to kill Bond but fail, and to Miss Taro's surprise, Bond arrives. Miss Taro then receives a call from her employer and is ordered to keep him at her home until other assassins arrive. In order to do so, she and Bond sleep together and spend the night together, until Bond tricks her into thinking they are going out for dinner but instead has her arrested for her role in Dr. No's plans. 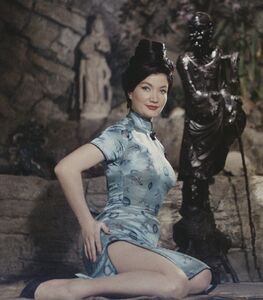 Miss Taro in a promotional image.