Member of The Order cult

Serving The Order and their teachings.

The Missionary is a boss and a major antagonist in Silent Hill 3. This humanoid creature is a transmutated, forgotten member of The Order, a local religious cult in the town of Silent Hill whose another loyal zealot Claudia Wolf is able to command him and ordered this lost man to avenge the Order.

In Silent Hill 3, it is a giant, hulking, humanoid monster wearing the Order's ceremonial robes (such as those seen on Pyramid Head). Carries a pair of bent spears with which he attacks Heather. It appears to have a head made up of many layers of decaying flesh held together a with visible mouth.

In Silent Hill: Revelation, the physique of the monster is clearly female. The monster has 4 discs sticking out of its head, blades on its arms, and exposed teeth. It also wears what could be considered promiscuous clothes, mostly colored black and red, similar to sadomasochism.

In the scene where Claudia transforms into the monster, it initially does not have the disks/blades in its head, as it does in every other scene in which it appears in. After a few seconds, the disks slam into place within her head. They seem to come out of nowhere, but could possibly erupt from the back of its head. The creature could possibly be using these disks/blades as a form of defense, as it could probably ram its head into something and slice it, although this action is not seen in the movie.

The Missionary is faced on the roof of Daisy Villa Apartments. A hideous member of The Order, sent by Claudia Wolf to kill Harry Mason as a revenge for taking Heather away from them 17 yeras ago. Fueled by anger Heather retalitates and killed this fanactical monster before leaving for Silent Hill to kill Claudia.

The Missionary appears in the 2012 film Silent Hill: Revelation as a vicious and faithful disciple of the local religious zealots known as the Order of Valtiel. It is the monster form of Claudia Wolf, the film's main antagonist.

The Missionary has four discs sticking out of its head, blades on its arms, and exposed teeth. She kills Christopher Da Silva in a dream sequence in Heather Mason's nightmares, murders the private detective Douglas Cartland in the Otherworld Central Square Shopping Center, and kidnaps Vincent Cooper in Jacks Inn. At the end of the film, Claudia, after the Alessa's defeat and Heather's arrival at the Order's underground haven known as the Sanctuary, transforms into the Missionary and attempts to kill Heather. Pyramid Head, the guardian and executioner of Alessa, appears and fights the Missionary, eventually decapitating her with his Great Knife.

The Missionary is a member of the Order that has become monstrous due to Claudia's power. To Heather's eyes, the appearance it takes is simply that of a monster. The word "missionary" refers to a person sent on a religious mission to persuade and convert another person to their belief.

There is a running theme of maternity and femininity in Silent Hill 3 and its monsters due to the central conflict of the game centering on impregnation in the cult's attempts to force Heather to birth their god. The combination of the Missionary's title, his clothing, and his weapons may be seen as symbolism of abortion: "Missionary" here meaning one who is hired to kill (perhaps symbolic of a doctor hired to kill an unborn fetus); rubber gloves, a mask, and a smock being reminiscent of surgical attire; and the long, sharp weapons being exaggerated imagery of abortion tools.

In Silent Hill: Revelation, the Missionary likely represents Claudia Wolf's religious indoctrination and raw femininity. The film's director Michael J. Bassett has stated that Claudia is supposed to be highly maternal, and the feminine appearance of the monster supports her feminine nature. The blades could represent religion being forced into her head.

Considering quite many Silent Hill movie monsters are accumulations of those featured in the games, it is also very possible the Missionary has some roots in the Needler beast from Silent Hill: Homecoming, the most obvious comparison being when the Missionary assaults Douglas and Heather in the elevator, just as when Alex Shepherd is attacked by Needlers in the game. 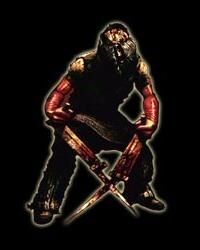 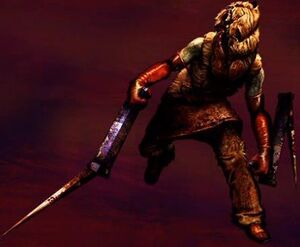 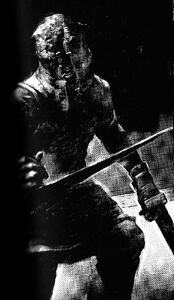 Artwork of the Missionary drawn by Masahiro Ito 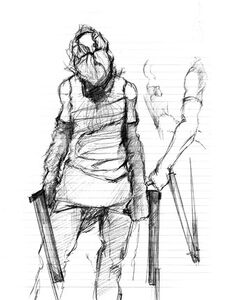 Concept art of the Missionary and the Scrapers 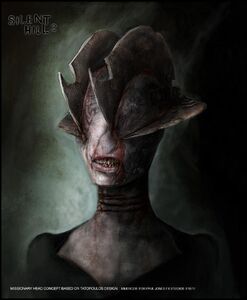 Concept artwork of the Missionary by Martin Mercer

The Missionary attacking Heather Mason and Douglas Cartland in an elevator

Claudia Wolf's transformation into the Missionary.

The Missionary being decapitated by Pyramid Head. 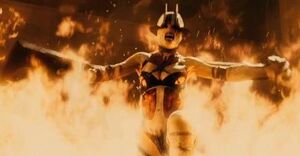 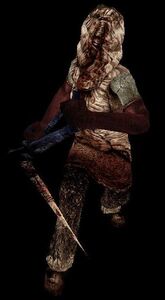