Member of the Order of the Coagula

Hypnotizing people via spinning her spoon in her teacup.

To help her family achieve psuedo-immortality for themselves and the Order of the Coagula.

Missy Armitage is a major antagonist in the 2017 horror film Get Out. She is a cult member of the Order of the Coagula and the matriarch of the Armitage Family.

She was portrayed by Catherine Keener, who later voiced Evelyn Deavor in Incredibles 2.

Missy is the wife of Dean Armitage and the mother of Rose Armitage and Jeremy Armitage, with the latter studying medicine alongside his father.

Together with her family, Missy kidnapped black people in order to brainwash them and to implant the brains of old relatives and friends into the bodies of the far younger and fitter black people. After Dean's parents Roman and Marianne became old and weak, Missy helped Dean implanted their brains into two younger black people (Walter and Georgina). To avoid suspicion, the two were publicly acting as if they were the Armitage's servants.

When Rose brought in her boyfriend Chris Washington to visit her family in their estate, Chris is afraid because Rose's parents don't know that he is black. However, Rose reassures him that her parents are not biased and are not racist, which is seemingly confirmed when Missy and Dean jovially welcome the two and hugs Chris. However, Dean seems to be in high spirits meeting Chris, and even Rose and Missy are a little embarrassed by Dean's behavior, to which Missy apologizes for.

Later, the four of them sit down in the garden and Dean shrewdly realizes that Chris is a smoker. Chris replies that he is quitting and Dean states that Missy, who is a psychiatrist, could help him with hypnosis. He reveals that he himself smoked for fifteen years, but that Missy's hypnosis helped him get off the cigarettes. Chris respectfully declines. Their dinner is interrupted when Jeremy arrives in the garden, having returned for the annual Armitage family meeting. Later that night, Rose apologizes for her family's behavior because despite their insistence that they have no problems with Rose's boyfriend being black, Chris'skin color nonetheless becomes part of the conversation all the time.

After Chris gets back into the house, he is surprised by Missy who is drinking a cup of tea in the living room. She invites Chris to sit with her and asks him whether he wants to know how her hypnosis works. When Chris jovially asks whether she just swings a pocket watch in front of people's faces, she laughs and tells him that he has seen too many movies. Missy then abruptly changes the topic, asking Chris whether he smokes in front of her daughter. She also asks him where he was when his mother died. Chris feels uncomfortable thinking about it but Missy secretly hypnotizes him by spinning her spoon in her teacup, creating a hypnotic rhythm. Thus, Missy learns how Chris' mother died. Suddenly, Chris, while still under the hypnosis, realizes that he cannot move. Missy confirms this but then continues her hypnosis, eventually ordering Chris to "sink into the floor". When Chris awakes from his hallucination, he is back inside his bed and believes that what happened was only a dream but soon realizes that it really happened.

During the course of his presence at the Armitage house, Chris becomes extremely suspicious about the Armitage family. This gets even worse when the rest of the family and close friends turn up for the annual party. Eventually, Chris takes a photo of the only other black man present, but forgets that the flash is still on. The man seems to snap out of something and suddenly attacks Chris while also screaming at him to "Get Out!". The man is held back by several guests and is brought to Missy, who presumably hypnotizes him.

Eventually, Chris is too freaked out by the weird things happening and he convinces Rose to leave in the middle of the night. However, they are confronted by Missy and Jeremy. Rose tells them that Chris' dog has died and that they need to be with the vet the next morning. Eventually, Dean joins the two as well. He sinisterly asks Chris what he believes to be his purpose in life. He does not wait for an answer but states that fire is just a reflection of humanity's mortality. He claims that even the sun will die some day but that humans are divine, gods trapped in cocoons. Realizing that the entire Armitage family, including Rose, is working against him, Chris attempts to flee, but Jeremy restrains him before Missy uses her teacup to hypnotize Chris, causing him to fall to the ground.

Jeremy and Dean then carry Chris' body into the basement where they tie him to a chair. They start a video tape in which Roman Armitage, Dean's father, explains the brain transplant procedure developed by his family. Chris realizes that Rose deliberately lured him into the home of her family so that Dean and Missy can capture him and to "sell" his body to one of their elder friends whose mind will be transplanted into Chris. Through the TV and the microphones in the room, Chris is also able to have a conversation with the man who will soon inherit the body and Chris recognizes him as an art dealer named Jim Hudson he briefly met at the Armitage party. Chris is informed that a part of his consciousness will remain in the body and he will be able to see and hear. However, he will only ever be a passenger in his own body. Chris realizes that all the black people he saw at the Armitage estate are actually white people who have taken over the bodies of the black people.

When the time for the transplant has come, Missy uses the TV to hypnotize Chris so he cannot resist. However, when Jeremy later appears to pick Chris up, Chris suddenly reveals that he has worn protection over his ears and has not heard the hypnotic sounds (and his unconsciousness was faked). He beats Jeremy with a prop from the room (a lawn bowl ball) and escapes. After killing Dean, Chris heads back up into the house where he suddenly stands in front of a shocked Missy. She immediately rushes for her teacup (which was on a circular desk a few metres in front of her), but Chris reaches for it first and shoves it off the desk, shattering it on impact, rendering Missy defenseless. Not ready to give up just yet, Missy grabs a knife from the same table and attacks Chris, but it pierces his hand when Chris restrains the struggle. His adrenalin enables Chris to grab Missy's neck and uses the knife stabbing his hand to stab Missy to death. 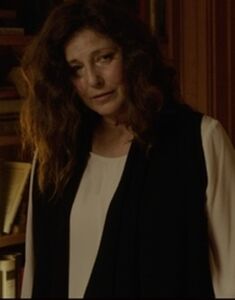 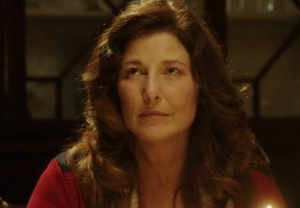