Mister Atom is a villain from the Marvel series.

Mister Atom was created in a story in Captain Marvel Adventures #78. His body gave the robot life also ended the life of his creator. Mister Atom went on a wave of destruction before he was freed by aliens called the Comet Men who hoped to employ his power in the conquest of Earth but the blast had actually thrown Mister Atom forward in time. Captain Marvel travelled to this future and battled Atom again, who once again was apparently destroyed.

Again Atom employed him to attach his head to an atomic racecar and challenge Captain Marvel to an auto race in Indianapolis with the threat that he'd level the city with an atomic blast. Captain Marvel attached his head to his body and attacked Marvel, who hit him hard enough to achieve escape velocity and send Mr. Atom into orbit around the sun.  Mr. Mind retrieved Atom and was shoved off the rock into another universe where life never developed, and he could do no harm

Mr. Atom is super strong and nearly indestructible. He can also fly, and shoot nuclear-powered blasts from his hands. He also has the ability to render radioactive materials inert.

In this animated series Atom makes an appearance in the episode "The Malicious Mister Mind" as part of the Monster Society of Evil. In this show he is voiced  by Dee Bradley Baker. 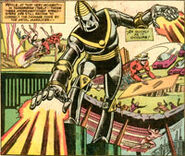 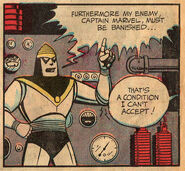 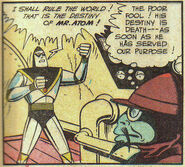 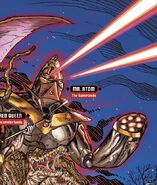 Retrieved from "https://villains.fandom.com/wiki/Mister_Atom?oldid=3627368"
Community content is available under CC-BY-SA unless otherwise noted.